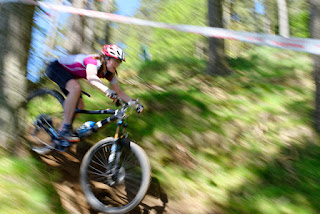 I loved the Glentress Seven course last year. The monstrous climb was truly rewarded by proper singletrack fun. But I was only a couple of weeks after a cold and not as fit as I'd hoped to be. I'd managed five laps and come in way down the field.

This year I was going to try out the Ibis Tranny. With a dropper post and 1x11 it was light enough to help me on the climbs and fun over steep and rocky. Dropping the security of my full suss Ripley was a gamble. But I was determined I'd get more laps in than last year - and that the key to that would be to climb like a goat on turbochargers. The Tranny is always game on for a bit of turbocharged caprine climbing. As long as my legs play ball. 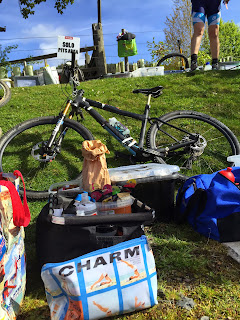 By some miracle of weather patterns, Saturday dawned clear and sunny. After sign up I even rooted round my kit for sun cream. For once I seemed to have eaten enough in the run up (the Tontine did us all scrambled eggs and coffee at a very uncivilised 7.15am) and I felt as prepared as I could have been.

At the start I talked myself into setting a steady pace. No racing off and blowing up from the off. Even so I couldn't resist the feeling of satisfaction as I cranked past a few other women. For the first time in my life I got to the top of the climb and thought 'well, that was short'. Training pays. The descents were everything that I remembered, and after initially worrying that I was 'only' on a hard tail I let go and just rode. As I came into the final slalom through the field I could hear another lass beating up behind me. 'Oh no you don't', I thought and let rip over the grass. We raced right down to the finish and I pipped her to the dibber. Just for fun - there were still seven hours left and I didn't want to blow it by pushing too hard.

I stopped briefly to swap bottles and then caught her again on the climb. She looked as though she'd pushed herself to get ahead. I felt fresh and slightly smug. She wouldn't be able to keep pace on the climbs as long as I kept my steady pace. As I reached the Buzzards Nest car park I remembered every time I've felt knackered on reaching it. And revelled in the fact that I didn't. More laps? Bring. Them. On.

And so it went. Grind up, blast down. Three laps in and there was a serious danger I would be on track for an eight lap race. Except, suddenly, my gears told me otherwise. A season of gritty riding suddenly decided to interrupt my flow. As I turned from the dragging, clay enhanced, gradient of  'Rue de Souffrance' on to the rolling switchback climbs where I could really kick along, the gears refused to shift up. Aaagh. I spun along frustratedly, wondering what to do. I'm quite happy to tinker with my bikes at home, but race head only distinguishes between 'working' and 'not'. I become unable to look for subtle problems. There were no flapping cables or obviously broken bits. At the top of the climb I tried thrusting my bike at the gaggle of cake ingesting chaps gathered around the Big Bear Bakery feed station. Genius that cake stop, incidentally. They concurred that nothing actually looked wrong and the gears shifted if not under duress. I filled my water bottle and decided to keep going.  I'd finish, no matter what.

The gears worked intermittently. There's no question that I lost some time and some of my fitness was wasted. But I could ride fast on gravity on the downs, keep my steady pace on the steeper climbs and spin a stupid fast cadence elsewhere just so I didn't lose too much time.

By lap six though I realised I wouldn't make eight laps. I was kind of relieved. Relieved enough to pile straight down the loose chute of dirt at the top of the top descent without heeding that I was on the tail of another rider. She had 'my' line. As I struggled to find alternatives I realised I wasn't prepared for that at all and gave up, into a tree. No harm done though and I rode off. 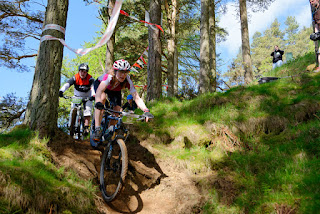 There are some cracking descents on that course. Linked by little inclines on which it is imperative to get ahead of anyone who looks as though they might impede progress on singletrack. As I stuck my head down to blast my way past the column of dragging, tired riders I heard one exclaim "ooh, bottom". Apparently the tree I landed in earlier had had its revenge on my shorts. And given me a bit of a scratch. Ah well. Best way to deal with it was to ride so fast the no one got chance to inspect it too closely. My favourite bit of singletrack was ahead, snaking though the woods althen cutting down into red earth round an off the brakes if you dare curve. Off the brakes, though, and gravity would gift you the climb out.

Last lap and tiredness suddenly hit. Climbing out of the pits trying to eat. Fluffing the first greasy descent. I'm sure the roots had moved. Grinding a little on the climbs. But the last lap. After initial sulkiness I was cheered up by a chap offering me his shorts as I passed him. No thanks, far too warm. But it got me back into my rhythm. No incidents, a bit of spinning with gears jammed but a satisfactory last lap.

At the finish I had no idea whether there were hordes of fast girls ahead of me. The occasional woman had passed but I'd managed to check that most were in teams. The only other solos I had seen for definite were the girl I'd raced on the first lap and one in green I'd passed earlier, thinking I'd lapped her. I think she'd passed me back at the end of the lap, giving the lie to that, but I had not chased her, forcing myself to pick up food at the pits so as not to blow up.

I saw her at the finish, and had a quick chat. Only then did I realise that she had won the event before and being just behind her meant I had a shot at the podium. I was amazed. And chuffed. I like training but the logistics of fitting it in have been hard. Being called up to take my place on the podium made me realise that it was working. I could ride fast and for a long time against women with experience and proper palmares. Liz and I (now we'd been introduced) shared a small chuckle that we'd both beaten all the under 40s field too.

I was five minutes off the win. Next time I'm changing my gear cables before I set out. 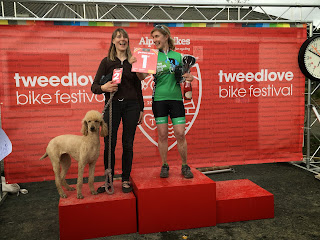 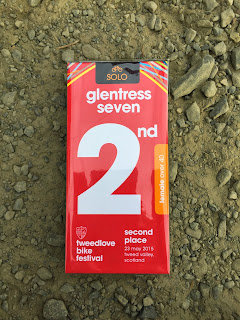