Training. Again. This time for Relentless at the end of October. Solo.

I wondered, out loud, whether I had one in me whilst racing pairs at Mayhem in the summer. Pairs seemed ok, enough of a break between laps for some recovery. Even a nap (and time to get over the quiche incident). I felt well-prepared. But how much more would I have to do to 24 hours solo? Nearly twice the number of laps. Could I do it?

The danger of saying this kind of thing out loud when there are seasoned 24 hour racers in earshot, is that they'll say yes. Yes, you should do that.

Jenn was in the Singletrack tent as I came in between laps. She said the inevitable. Cheerily.

So it's been three months of training since then. Training that has involved both long rides and interval sessions. Twenty minute hill climbs, eight minute seated efforts, four, three, two, one minutes flat out. Thirty seconds at max. These last, particularly, are best done on a turbo. Pushing yourself as hard as you can, staring at a blank wall.

I try focussing on my pedal strokes. Thinking about my day, things I'm going to do, things I've done. Rides in the outdoors. People I love. But my eyes stray back to the clock. How long until I can stop? A minute to go, thirty seconds, fifteen, ten, nine, eight, seven, six, five, four, three, two, one. Gears down, legs spin, breathe.

This constant countdown has me wishing the seconds away. My legs burn, there's sweat running in unbelievable quantities, I'm gasping. My head pounds. Things, in general, hurt. I catch sight of the timer. How can there still be so long to go? Each moment that clicks down is an eternity. How can a second be so slow? But amongst the desires for each session to end, there's another meditation.

You see Jenn has cancer. She's been on a finite thread for over a year. Despite being invincible in so many ways, things are happening to her no one can control. They can slow, they can alleviate, but they have cannot stop it. And despite this, she's running, riding, doing as much as humanly possible. Sitting in the Singletrack tent at Mayhem, dishing out magazines and advice to racers. Packing life in.

I cannot, should not, wish seconds away, because, well, sometimes they're all you've got. So every few seconds - as the sweat pours and my vision becomes a bit ropey - I try and remind myself to enjoy every moment. I probably don't manage full on pleasure, no matter how hard I try, but I appreciate them. They're seconds, I am alive.

It's a sharp, bitter reminder that all our time is finite. We only have moments really. Each one is precious, we mustn't let them slip away, unlived. They need to be packed with days of glory.

Jenn died yesterday. I jokingly said I'd thank her after Relentless for encouraging me to enter. It was unimaginable that I wouldn't be able to. Jenn, mountain goat, endurance goddess and indomitable force was no meek victim. But cancer is cruel, twisting the things that make us strong. Shocking as it robs strength and breath, second by second. So the clock ticked out. And the words for the awfulness, the unfairness, are completely lacking. Relentless is looming, and I'm just sad that I can't say thank you. 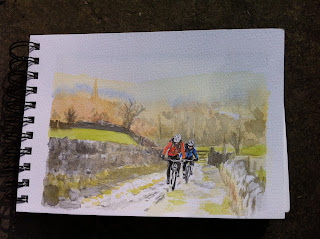 Jenn and Barney in the Peaks