There’s no other way to visit the top of Whernside, Ingleborough and Pen-y-Ghent with your favourite two-wheeled companion apart from taking part in the Three Peaks Cyclocross race. It sounds romantic. I’ve watched others do it. They are clearly bonkers.

At the start of last year’s race I was cheering on my boyfriend. I nipped into the ladies’. There was a rider in there, preparing for the start. She was a tiny woman so delicate looking and a couple of years older than me. I was so impressed that she was taking on this race when there were so many big blokes - my boyfriend included - who have a genuine respect for this race as one of the toughest in the calendar - that the seed was planted. Maybe I could do it too.

I hadn’t even ridden a short cyclocross race at that point. I was warned it was hard to get an entry - you need to prove that you’re likely to finish. But the seed was there - and I started making tentative steps.

a) have an entry - much to my surprise, delight and terror
b) have raced several cyclocross races (currently third female in the Yorkshire Cyclocross Summer Series rankings - although this is more a case of persistently getting points by attending all races rather than any speed at least it showed the organisers that I was worth an entry!)
c) have been knocked off my cyclocross bike (also my daily commuter) so it’s in bike hospital and coincidentally I've been told I’m run down (or at least have anaemia and Vitamin D deficiency).  Ooops!

I feel that I'm right at the start of a rather long journey...

Most importantly I have decided to raise money for Amnesty International and Greenpeace. It’s hard to sum up briefly why it’s so important to fund these two organisations - they’re both campaigning organisations. It’s so easy to get depressed about the state the world's in - the damage to the environment, the awful events in Syria, the terrible danger so many people live in. But, essentially, I’m an optimist - and I've always believed that if you don't like something you have to try and change it. Even if you only do the tiniest thing, it's better to light a candle than curse the darkness.

Both these organisations have supported, protected and brought together people and have changed the world. I’m a child of the iron curtain - remember that? Gone. Because of the persistance of ordinary people. Like CFCs: banned (and the ozone hole is smaller than it was). Because governments were pushed into banning them.

Yes, there’s loads to be done, the problems of the world are vast but these are two organisations that shine light in dark places and harness the power of ordinary people for change. So, please support them.

I’ll do my best to get fit (and eat my new iron tablets), fast and learn to fix the bike in case of emergencies. I hope you’ll join me on the journey - for the whys, the highs, the mud, the blood and if nothing else, just to laugh at me for a piece of glorious insanity.

There are 100 days until the race, so I’d better start getting ready. 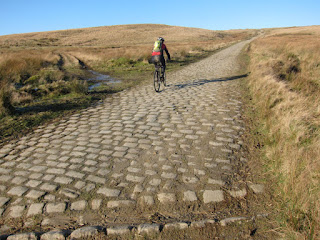