And then it rained...

So, I've started with the best intentions. There are three whole months to get my body in shape and my bike handling (and fixing) skills up to scratch.

I would like to put in a respectable time - although whenever I see any pictures or accounts of doing the Three Peaks I reduce that back down to 'please, please, just let me finish'. (Like this: cross junkie blog or this amazing piece translated from Italian by Google translate which kindly ascribes the words 'mentally ill' to the competitors).

My training programme (ok, it's a bit vague but I have decided to try and work on skills and fitness which will prepare me for each of the three sections) was all going swimmingly last Wednesday. I found a suitably steep and long track to practice carrying my bike up and did a couple of laps just to find out how hard it was.

Yes, it was hard, I wanted to cry and give up after 20 seconds. Then I stopped trying to run and accepted that stumbling up would be better than not doing it at all. It seemed like an eternity, and one on which everything hurt, and on which I still had to concentrate on what my feet were doing as it was a tiny, rough and narrow track. Apart from the hammering heart (412 feet of climb in less than half a mile) and the sore shoulder from carrying my bike, the worst thing was having jelly legs when I climbed back on. And the other worst thing was completing a circuit and thinking to myself that I'd better check that it wasn't a fluke, and do it again. Ow.

Once home, I checked on the Three Peaks website and found that Simon Fell - the first climb of the three peaks is three and a half times the climb I'd just done. With this in mind, I thought I might go back again and have another go.

On Thursday I rode home from work over the tops - thinking I would get a few 'free' training miles in. In fact, I got a new benchmark: inner tube change timing. I punctured just before the spot where I'd practiced bike carrying. I was rather disappointed to find that it took me 26 minutes to put a new tube in. That could be improved on! And I would save my bike carrying practice for another day.

And then it, literally, started to go swimmingly. It rained.

No, you don't understand. It rained. And rained. And rained. I am relatively hardy so the rain itself wasn't a problem. The problem was that half of Hebden Bridge where my business, Makepiece, is, was under water. Not to mention a significant part of Todmorden where the Makepiece studio is. Although we weren't flooded, I had to pitch in and help!

The net result is that so far this week my training regime has consisted of:


I finally got back onto my bike on Wednesday expecting to do a 'cross race in the evening. At least that would be a contribution towards improved fitness. However my boyfriend, Chipps, had to work late and we couldn't make it.

He did make it up to me by beasting me up the hill behind our house then making me practice 'cross mounts and clipping in on the moorland track at the top before tea. He's been clipping in for 20 years - I have been using shoes with cleats that 'clip in' to my pedals since October, and I really do need to practice! Stuff like this uses less energy once you're good at it and all these little things can really help when the going is tough.

Oddly my shoulders feel quite sore, so I guess jet washing has had some kind of an effect. 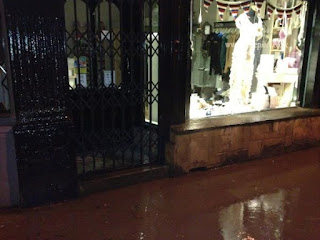 A close call for Makepiece - thanks to Giles Dring for the photo taken at midnight on Friday. I couldn't get to the shop because our house was cut off by this:

More about the floods on the Makepiece blog and Facebook page.

I'm hoping that next week will be a bit more focused and I'll get a mix of long and short rides in. And some more carrying my bike (ugh, I don't like that bit at all).


Please don't forge that I am doing the Three Peaks race in support of Amnesty and Greenpeace (all those with wet feet and worrying about about global warming please donate).