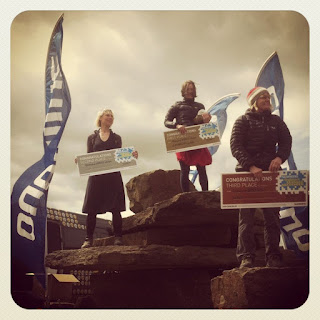 I've not raced much - a handful of cyclocross races, a couple of laps of Sleepless in the Saddle last year, Hit the North and the Dyfi Enduro (although strictly speaking, it's not a race, it's a challenge). I'm actually terrified of them. Beforehand a nagging, grumbling, doubt about the wisdom of entering builds to a crescendo of screaming banshees of fear, screeching the details of my physical, technical and nutritional lack of preparedness as the race approaches.

The sound of fear, in my case, is very rational. It details how little experience I have of mountain biking, of racing, of bike fixing. How skilled everyone else is, their years of practice, their respect for the course. I'm a beginner. What am I doing taking on difficulty and danger? Why? I won't win and I will probably end up looking stupid. With bruises. If I'm lucky.

The solution. Do more races. Make them seem normal. Or that's the theory.

I entered the Weekender right at the last minute. I know Lee Quarry, the venue, and navigating it the first time was pretty scary. But hey, I have had a few fun days there since, where I've not been terrified (as much) and I have been on a skills course since then. Or so I told the voice of fear.

The Weekender is a three part event which must be completed on the same bike. In my case, my trusty Ibis Mojo. The bike that likes to stay upright*.

The first part is a trials test. In which you have to attempt a very steep, technical hill climb, ride down a skinny log without falling into a pond, up and down some hefty steps, track stand for 30 second and ride over a see saw. I managed two of these (the skinny and the see saw) - to my surprise. I didn't expect any! I didn't try either of the two more testing trials - fishing a duck out of the pond whilst riding the skinny or riding a ring of slabs - proper trials rider stuff and you were given penalty minutes if you failed. 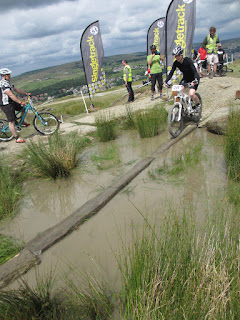 *see, it likes to stay upright

After the trials came the downhill, the most terrifying part for me. Getting a grip, I decided to try out the  course in sections. Not to worry about fast lines and slow lines, just about finishing in one piece.

The main obstacle - in my mind at least - was the drop into the arena. From floor of the arena, my eyes, and head told me that the steeper line was smoother. Peering over the edge, they back-pedalled rapidly into the squealing realm of 'you will die'. Watching burly bloke after burly bloke disappear over it did nothing to quell my fears. Onlookers added pressure, the fear of looking an idiot was coming through loud and clear.

But the second they all disappeared, I sneaked up to, and over, the edge. Saw the terrifying sight of my front wheel disappearing down a near vertical slope but instead of panic, heard the voice of great firmness saying 'Commit to the line. Get used to it'. And I was down, and being sped towards the next section by my bike.

In the event stringing the sections together was harder than I expected - carrying the momentum from the first section and hearing the crowds to boot. I had to get over that edge despite them.

I did. Commit. Maybe not quite to the line I'd taken in the clear headspace of practice. There was a collective intake of breath. But I was right out over the back wheel and I didn't brake (or breath). And then I was down, over, onwards, scarcely believing I'd done it. Veering slightly wide in my joy. I made it through the gaps, down the singletrack and in and home. Not in a terrific time but unscathed. And proud.

Just because we could, I went for a second run. Fluffed two bits that had seemed innocuous and ended up having a little sit-down with Mountain Rescue to nurse my multi-coloured knees. Oops.

Hey ho, I was through and with a total thirteen penalty minutes (ten from the downhill and three from the trials). Which may not sound great, but the best female downhiller had only one less. The idea of the penalty minutes was to even the odds between trials riders, downhillers and the cross country riders. Those with penalty minutes set off after those without.

The cross country race was on Sunday. Three laps of Lee Quarry. That sounded quite short so I decided just to take a drinks bottle and some Clif shot blocks, just in case. I regretted that when the sun came out. I needed a drink and I had to slow down to get my bottle in and out of my jersey. Never mind.

The thirteen minute group was quite large. I set off at the same time as Kirsty but was not really in contention to pass her, ever. My steady pace, however passed Sue, a minute ahead of us and the other woman vet, on the first long climb, not to mention a fair number of blokes. Hurrah.

I was glad to have had a recce of the course. There were a couple of intimidating points but I had them cracked by the second lap. And there were lots of the fun berms of Lee Quarry included in the course which was fun. At least I tried to remember that they were fun, the pressure of racing sometimes interfered. But the more laps down, the more that eased. The only really, really annoying thing was dropping my chain. Twice. And on both occasions being overtaken by the same bloke. I caught and passed him twice on the last lap. Then right at the end he sneaked up behind me and passed me on the finish. Being annoyed was soon tempered by the fact that he admitted that trying to keep up with me had motivated him to finish the race. 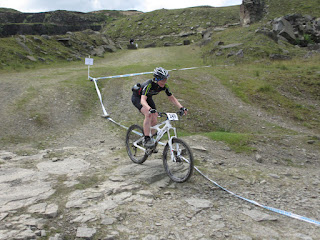 So, what has this to do with the Three Peaks? I need racing experience. And that was racing experience, with plenty of adrenaline, peer pressure, crowds, shouting, performance anxiety, raging self-doubt and a bit of sheer terror thrown in. And I did get over them. I may have scared a few people when I dropped into the arena on an 'unconventional' line. But I didn't panic or grab at the brakes. Which is good to know, satisfying. I'm going to do any races that come my way, just to help get used to the whole thing.

And, best of all, I made my first podium. I was thoroughly beaten by Kirsty in my category (well done!) and Julia who won the senior women's race. But I was second vet and third overall, which was very satisfying. And I get a pair of Shimano shoes, which look like they may come in handy for the Three Peaks.

Now, please click and sponsor me! Amnesty or Greenpeace - the choice is yours. And I'll be very grateful (and thinking of you) all the way up Whernside and down Pen Y Ghent.
Posted by Beate on a bike at 13:22