Do not fall off your bike 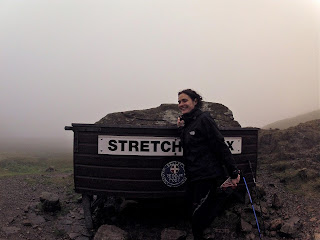 I've just been to the physio. Not just any physio. Mills Physio. She's very good at cyclists (here she is, with her favourite piece of advice writ large - there's probably a bike propped just out of view too). And she know how much doing the Three Peaks means so she's not going to tell me not to do it or not to train to do it. She's going to tell me how to.

At least that's what I hope, as she moves shoulder, the right, through all its range and shows me the muscles that are not extending properly. And for comparison runs the nicely mobile left one through its paces without any of the winces and grimaces she's just elicited.

If you fall off your bike, onto your shoulder, it can become quite sore. And if it's sore, you hold it into a position to protect it, causing more stiffness and swelling and pain when you move. Until you come to the conclusion that you are condemned for ever to a lop-sided existence with twinges whenever you reach out in a way that is not-approved by the newly clenching muscles.

Which won't do if you're planning to use said shoulder for carrying your bike up several largish peaks, never mind directing the bike in the right directions on the way down. 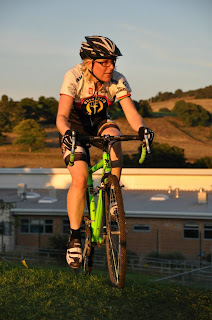 So, to rewind. I was enjoying my cyclocross learning curve with the every-other-week (ish) discipline of the Yorkshire Cyclocross Summer Series. Every session was a voyage of discovery - from realising that my bike was equipped with stupidly high gears to learning not to follow slow giffers up hills too closely (they may roll back and take off your rear derailleur). Two races ago, I learned that falling off can have consequences.

I'd just started enjoying the race, there was only one woman ahead of me in the field and I was flying. Maybe I should always take a quick deep breath or something when I get that 'I'm flying' feeling. I flew on though, down a short, steep, grassy bank and my wheels went from under me. I'd obviously chosen a better line the previous times. At the time, I was less bothered about the pain in my shoulder than the fact that I was having difficulty getting my chain back on. It lost me maybe a minute as the other women in the field all sailed past. Once I'd managed to overcome my fingers and thumbs, the only thing that mattered was catching them up and regaining second place. I did but I was fairly breathless by the end!

Two weeks later, I rode a much more conservative race and finished bruise free (although ending up in a tape dead end meant another battle to keep my place, so many things to learn). But the shoulder niggled. Another couple of weeks later, I gave in. It wasn't getting better on its own and I was having to be very ginger with my training.

Carrying my bike had even less appeal than usual. I have felt quite battered after off-roading and mountain biking sessions and ever so slightly under the weather all the time. I didn't manage the 100 mile ride I had as this weeks' target and I am beginning to worry that the shorter rides and skills won't be enough. I need endurance too.

The pain was only sharp if I moved in certain directions, and I managed to ignore the lower levels of it to get on with stuff. I usually accept that falling off is part of learning but I've been careful not to - and probably stiffer because of it. None of the effects have been huge, but it has been a drag; a small constant debilitating effect.

So I ended up on Ms Mills couch, with her digging her fingers into muscles to persuade them to release their crampy hold and set my shoulder back on straight. It's really odd how interconnected the sets of muscles are, how sensation is referred as one muscle is relaxed and then another. It hurt quite a lot which made me realise how out of true the shoulder had become.

I decided not to try and ride my bike today, just to help the shoulder get used to being back in place before I start doing things to make it tense up. I have exercises to do to help strengthen the back of the shoulder so that it isn't so prone to rolling in and a nice stretchy band to do them with. I have been told heat is good and not to carry bike for a few days and to let Ali know how it's going next week.

Post script: It took me a while to get this up. Shoulder is definitely on the mend, but I have to be careful. Carrying will start next week.