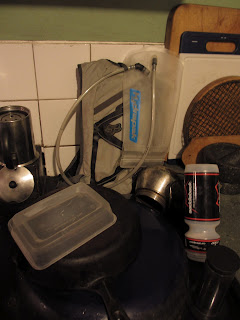 So, I am as excited as a child at Christmas. I am collecting together the gear (I've cleaned this little low profile backpack and bladder off for the occasion). I lay awake last night thinking about the course and wondering about the weather and realising that I didn't really care. I just want to do it!

I went to see Ali this morning for a second look at my shoulder. She confirmed that it's getting better and told me to cosset it a bit this week. Not to get it cold, give it a nice heat pack one night and generally recover.

So, the training. Yes, I've been doing some. Not as much as I'd like but enough to feel moderately prepared. At least an extra CX loop every week. Another competition - the Singletrack Up the Buttress for cobbled climby madness (second elite woman since you ask). And another 'cross race.

On Sunday 23 September we stopped off on our travels for a bit of London League cx. We thought it would be balmy and warm down south. We were, oh so, wrong. A solid hour of heavy downpour - although the course was such good fun that I didn't really notice until I peeled my clothes off and they puddled on the floor.

The best bit was that I slid off on a corner, and nothing hurt. There were at least 13 women to chase down as well - I made it upto 5th place which wasn't too bad considering that I didn't start too well and  I've had a bit of enforced tapering - a week in London for London Fashion Week. Although that was definitely part of my training to drink like a cyclist. Champagne at 10am anyone?

The course was really fun - Redbridge Cycling Centre hosts mountain bike events and they routed the 'cross race round a couple of blue route bermed corners, through some muddy singletrack and over three decent sized humps as well as up and down more standard playing field fare. The rain gradually increased the slipperiness but the mud never became really deep and boggy which was nice.

I tested out my shoe choice - I think I am going to stick to my Pearl Izumi non-waterproof but flexible mountain biking shoes and try and keep moving fast enough not to get cold. Other than that I have stacked neatly every possible combination of mountain biking wear I possess. And some nicked from Chipps as well.

It's likely to be not-that-nice on Sunday so I'm expecting to be wearing tights (maybe winter ones), a base layer, jersey and a waterproof. However, last year it was bright sun by the end of the race from a rainy start so I am keeping all bases covered.

And taking a pair of Sealskinz socks. Just in case I turn into a wuss halfway through. I changed into them halfway round the Mary Towneley Loop I did earlier this year and they improved my soggy life for quite a while!

Right, back to more packing and bike fettling (or, more accurately to stand next to Chipps and look on as he fettles the bikes). There'll be an equipment list before the end of the week...

I have been really rubbish at collecting sponsorship. Please sponsor me - for Amnesty or Greenpeace! These links go straight to my JustGiving pages, go on, use them xx