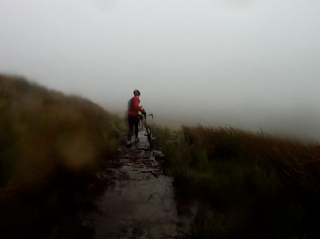 The strangest feeling. I wasn't worried.

The day dawned. Or rather, a dimmish light seeped from behind the cloud blanket. The air was thick with drizzle. But I felt impervious to it. Very matter of fact. Make breakfast. Eat. Put clothes on. Go.

I forgot all sorts of things (to brush my teeth, apply chamois butter and pack a lip balm) but I had reached the point of don't care: go. This thing had been calling me for some time, and it was time to get on with it.

Having said that I was slow off the mark with lining up and quite far back in the line up, close to Chipps and a few other friends. The weather forecast (damp and windy) had made me choose winter tights. I'd decided to go for my more flexible shoes even though they weren't waterproof, with wool socks which stay warm, wet or dry. I set off wearing a waterproof jacket. I didn't take it off for the whole race. 'Damp and windy' proved to be an understatement.

The start was great. The bike is light and suited to gentle uphill so I flew ahead, making up places, keen to get a good position on Ingleborough. The first tracks were easy, the kind of farm tracks I love riding. But we were crossing streams within minutes. A pair of riders collided in front of me, and immersed themselves in a brook. It was salutary. I jumped over it, noting that it would be good to keep dry for as long as possible.

As the hill became steeper, the true bogfest began and I realised that trying to dance every mud puddle was futile (mud puddle, there must be a word for that. Muddle is taken though). I was quite happy slogging up though, and reasonably fast. Making sure I didn't lose a shoe in the sucking mud. But that was the warm up. I'd seen the pictures of Simon Fell's crazy angle and was just waiting for it to start.

Steep went steeper and we started to enter dense cloud. Shouldering the bike was not too bad - turning it to the wind accidentally was a big mistake with much staggering and the odd falling over episode. Perhaps the carbon wheels, with their deep rims, were not the best choice. Too late now...

Despite this (and weaving across the almost vertical slope at the pleasure of the wind) I was doing pretty well and moving slightly faster than the column which had kept to the left to use the fence for support. Once the 'super steep'™ bit was over, there was still more 'quite steep'™ before the path flattened and we were disgorged, disorientated, in dense grey mist on the top of a grey, stone splinter strewn plateau. Tape guided us through this monochrome landscape to the marshals, and the first dib. The feeling of achievement and elation was amazing! If I can do this, I can do anything.

The descent flashed by - a bit stumbly to start with. I was finding dismounts and remounts challenging. After a few 'surprise dismounts' I came to realise that the winter tights were descending slowly and acting like a slingshot whenever I tried to get into the saddle. I'd get on and then be surprised to be spat off again immediately and unceremoniously. In fact, the whole wet kit, wet legs, wet shoes for sustained riding was a new experience. My brain switched off to the discomfort (good - I kept going) but also to the consequences (bad - I found it difficult to square up the fact that things that I would usually find easy were much more difficult with soggy kit as I became more tired).

For Ingleborough, though, this wasn't yet an issue. I made it down the descent on a wave of elation to the delightful sight of Stanny with his bag of treats. I ate half a banana and took a bottle filled with energy drink and set off. The link road to Whernside wasn't far off and as I rode I reflected that maybe I hadn't eaten enough. Then it dawned on me that my food was in my backpack. For a couple of minutes I actually deliberated about getting at the food but fortunately (although stupidly slowly) came to the conclusion that I had to do it. I stopped, stuffed a bar into my mouth and got going again, resenting every non-moving second. Note for next time!

I don't remember much about Whernside, apart that the rain and the wind were worse. I had to push in places when carrying would have been more efficient for fear of being swept off the stone staircase into the mist-filled abyss. It felt like I was being sandblasted. There were a lot of steps. They were slippery. So was the bank next to them. I kind of ground at it, rather less enthusiastically than I might. I kept losing my bottle - its magnetic attachments which worked off road on other occasions were really not up to this. I hoped that it wasn't a metaphor.

The descent off Whernside was probably my least favourite bit - I kept trying to ride it but it was low visibility, deceptive and wet. The water bars were hidden in puddles as were the edges of the path at times. There were so many ways to come off the bike. Slipping off the edge of the slab path stalled the bike and led to falls. Cycling along the boggy bank led to sliding off to left or right. Or to plunging the front wheel into bog pools, creating another version of the stall and off. Falls created amazing cramp throughout my legs which I've never felt quite so comprehensively before. Chipps caught up with me at this point and disappeared off into the mist (my race strategy was to keep ahead of him for as long as possible so that if I had a serious failing of any kind he'd know and possibly be there to shepherd me down to base).

This was where the conditions bit me - my wet kit flapped around my legs, I found it hard to remount and avoid the crotch-slingshot effect, and my brakes did not want to work, ultimately ending in a comedic 'can't brake, can't stop, steer into reeds, over the bars' dismount. That hurt quite a bit and when concerned fellow riders picked me up, I was vastly grateful. I was a little more circumspect after that, giving steep terrain a miss and running more. I did manage to ride some rocky gently sloping sections and gave myself a little cheer for getting over quite a few water bars. In retrospect, they should not have held much terror but I was probably empty and a bit cold which was affecting my mind and skills.

When I finally reached the bottom of Whernside (which seemed to involve fording several torrents - only one of which had a bridge) I was very relieved. The doubts which had beset me in the mist vanished (probably as Stanny stuffed jelly snakes into my mouth, washed down by more energy drink). I'd come this far, I would finish.

The link road seemed to take forever and I managed to add some Clif blocks to my calorie intake. They're quite tricky to open whilst cycling though (note for next time). At the bottom of Pen y Ghent I turned down the lane - familiar with it from cheering Chipps there last year. As he'd told me, it was just the kind of terrain I like riding on a cx bike, stony and not too steep. Wonderfully, my friend Kirsty who was there to cheer offered me water and when I asked whether she had sweets, one of her friends broke up a bar so that I had it handy in my front pocket.

Riding Pen y Ghent lane would be something I'd do for fun on a good day. On Sunday, it was satisfying as I ground up it, refusing to dismount as people around me were doing. I even rode the three foot deep puddle at the bottom (I was bemused that I managed it - it was a really odd feeling to have water lapping your thighs as you ride).

Eventually it became too steep and rocky. The wind was hard work and quite often I had to wheel rather than carry just to avoid being blown away. I had a few dispiriting moments as I seemed to get slower and slower - until I remembered the bars in my pocket. They were so easy to eat and as I chomped them down my mind cleared and my feet started to move faster again.

People were dashing down the hill on the lane as we struggled up - and I envied them! As you near the top of Pen y Ghent there's an amazingly steep section, after which you hope it's over. Of course, it's not, there's a upwards sloping boggy section to go (how we can have bogs at the top of mountains is a mystery - but they do seem to be a speciality of the area) before the welcoming sight of mist clad marshals. Again, a wave of sheer joy passed through me. Turning back onto this now gently descending, but horribly boggy, terrain, it looked like the promised land. Well, as far as we could see. Which, honestly, wasn't very far.

Despite the bog, from which we slithered onto the loose, rocky path, the descent seemed to go so quickly. There were still a few people struggling up near the top (which meant, happily, that I was not last). I became happier and happier, uncovered my brakes and let rip. I was delighted to pass quite a few people. I'd been eyeing up the path on the way up and it felt familiar enough to pull the stops out.

Sadly one lady got me back on the link road - my highest gear was too low to help me keep my advantage as the last two miles are almost entirely downhill.

But in all, I am delighted. I finished and a lot of people didn't. It took 5 hours and 45 minutes - longer than I hoped but fast enough to make me 23rd woman in a field of 57. I got a medal. I might wear it round the house occasionally. It has been the most physically demanding thing I have ever done. I tested the limits and measured up.*

*If I ever want to raise money for charity again though, I might pick something easier next time. Like a coffee morning.
You can still donate on my justgiving pages. Go on: amnesty ... or ... greenpeace the choice is yours.
Thanks! Beate