With these hungry eyes 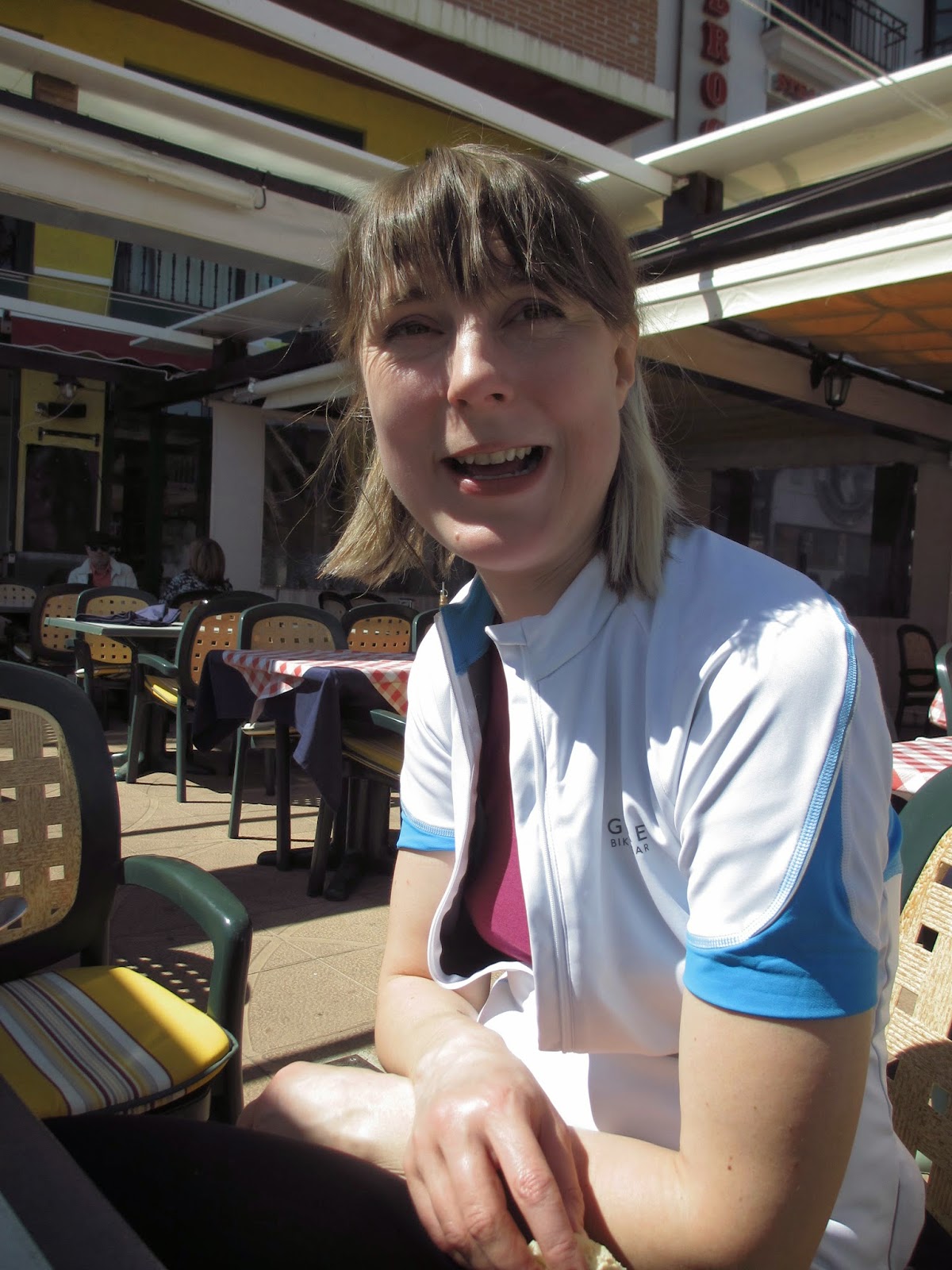 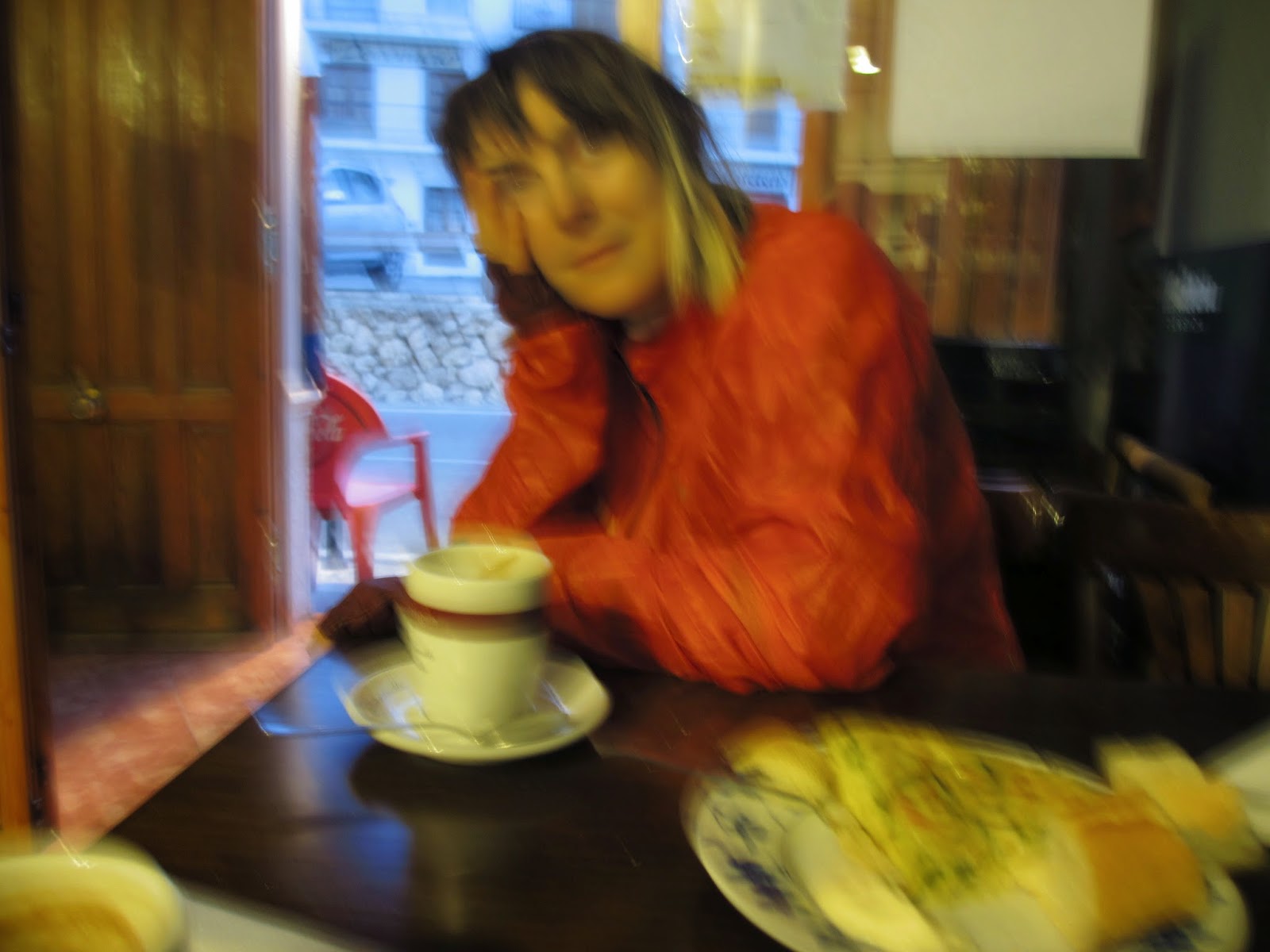 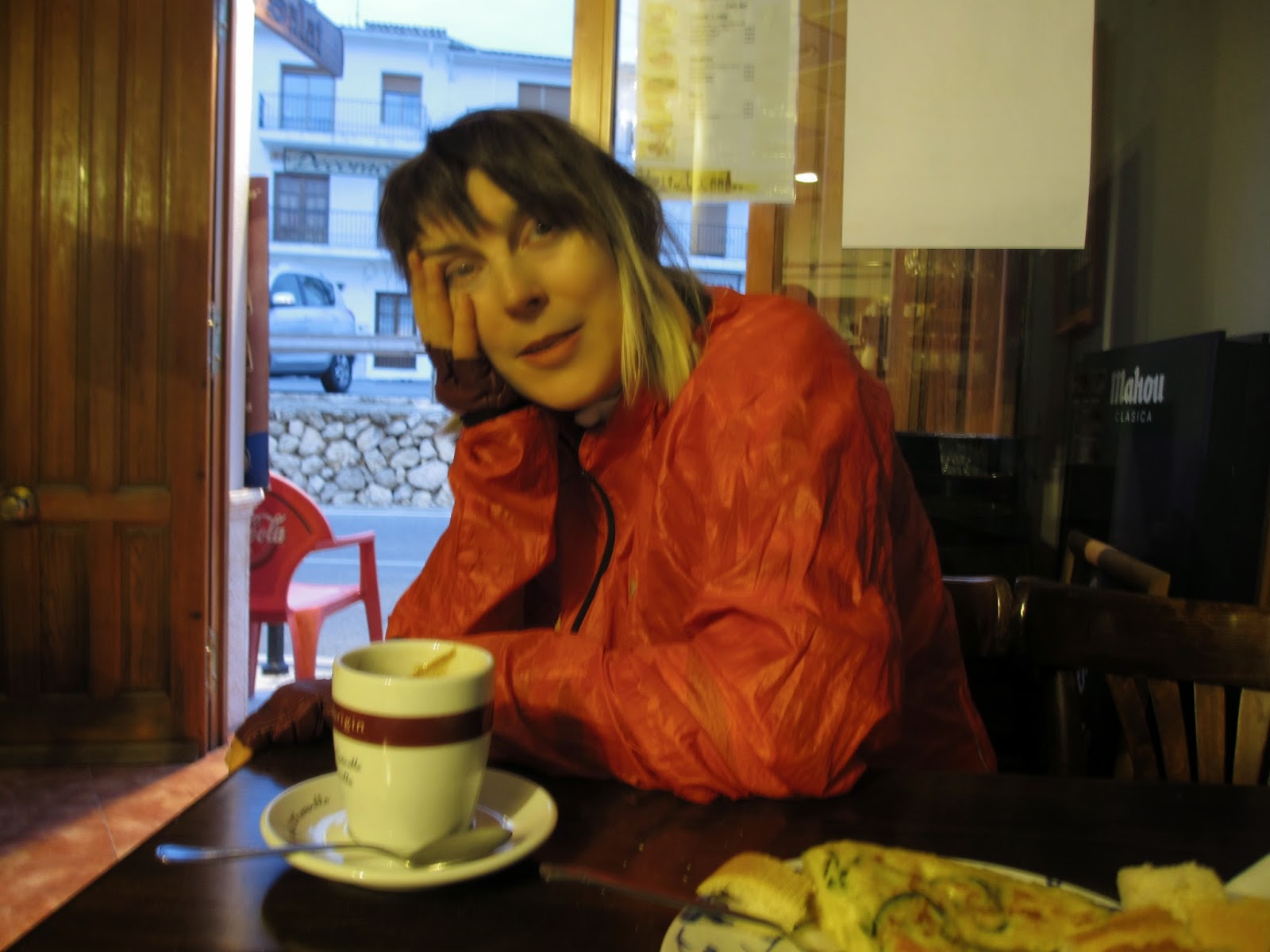 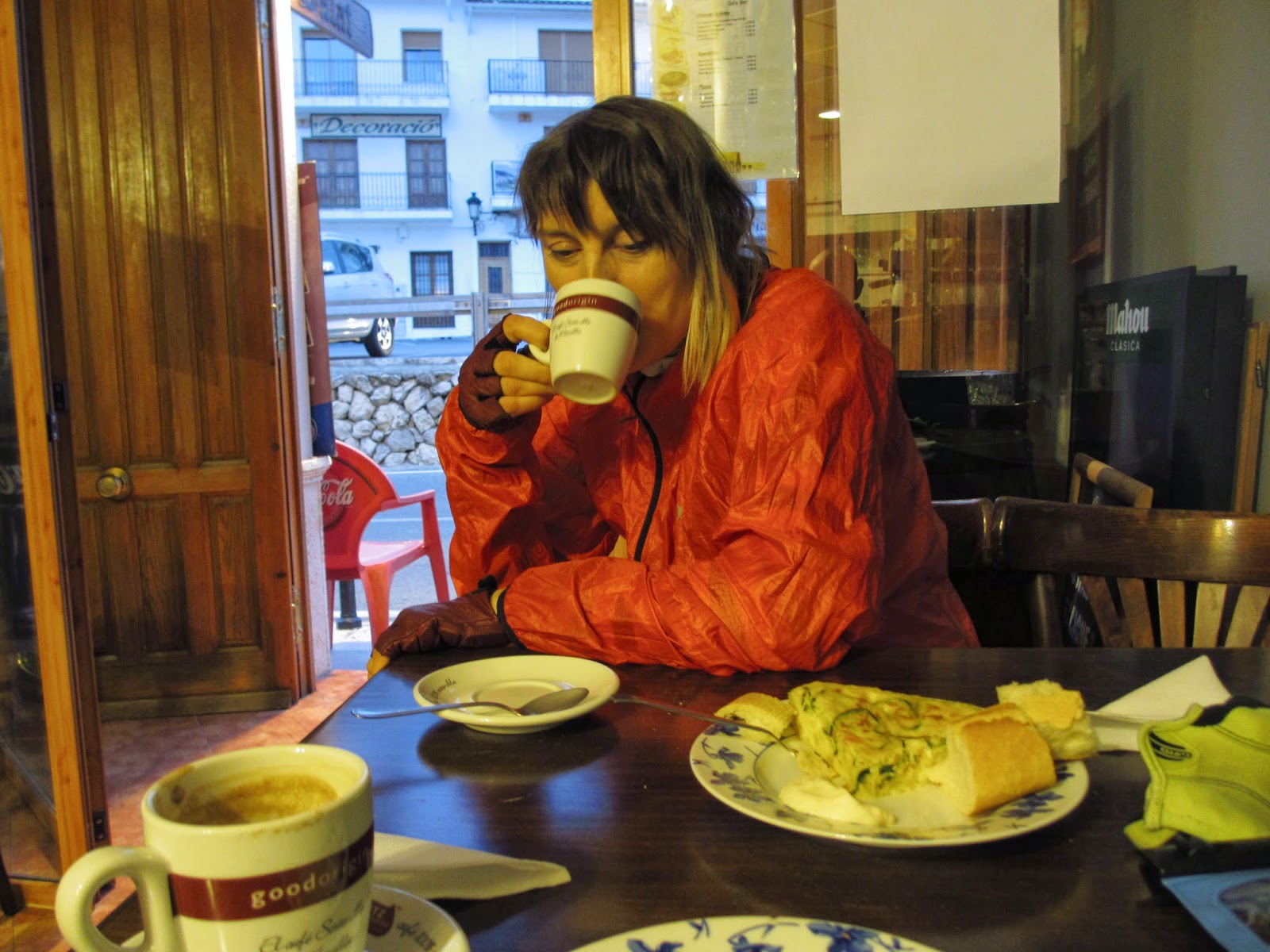 In just a hundred and eighty kilometres

'Hungry eyes' isn't awful as ear worms go. It was definitely on repeat in my head as we started out. We'd decided to go big with our first ride in Spain, and put together a huge loop, as long as we could string together. Travelling out north from the flat we are borrowing, out along the coast for nearly 50km before heading inland and up into the mountains that crowd the Costa Blanca.

'Now I've got you in my sights' as I kept my eyes on Chipps, not letting go of his back wheel. Drafting is a skill I have to practice. We were bemused that our 'flat' start climbed 800m before we even hit the first climb into the mountains. It was the hottest part of the day and suddenly seemed very quiet, stifling and I felt slightly sick.

I had ordered lunch at 50km, deciding early that we needed to supplement the bars we were carrying. The dish I ordered turned out to be cold potatoes thickly coated in a delicious aioli. So much for my Spanish. Not plain boiled potatoes then. Also, so much for my cycling nutrition. Delicious, maybe, but heavy? Definitely. I am sure I read somewhere that fat makes carbohydrate more difficult to digest and slow to use.

Perhaps that explained why, two and a half hours later, I still felt leaden, lethargic and nauseous as we wound up hill and into the mountains. The agriculture changed from orange to olive terraces, then downhill and back into pollarded cherry trees, thick with blossom. 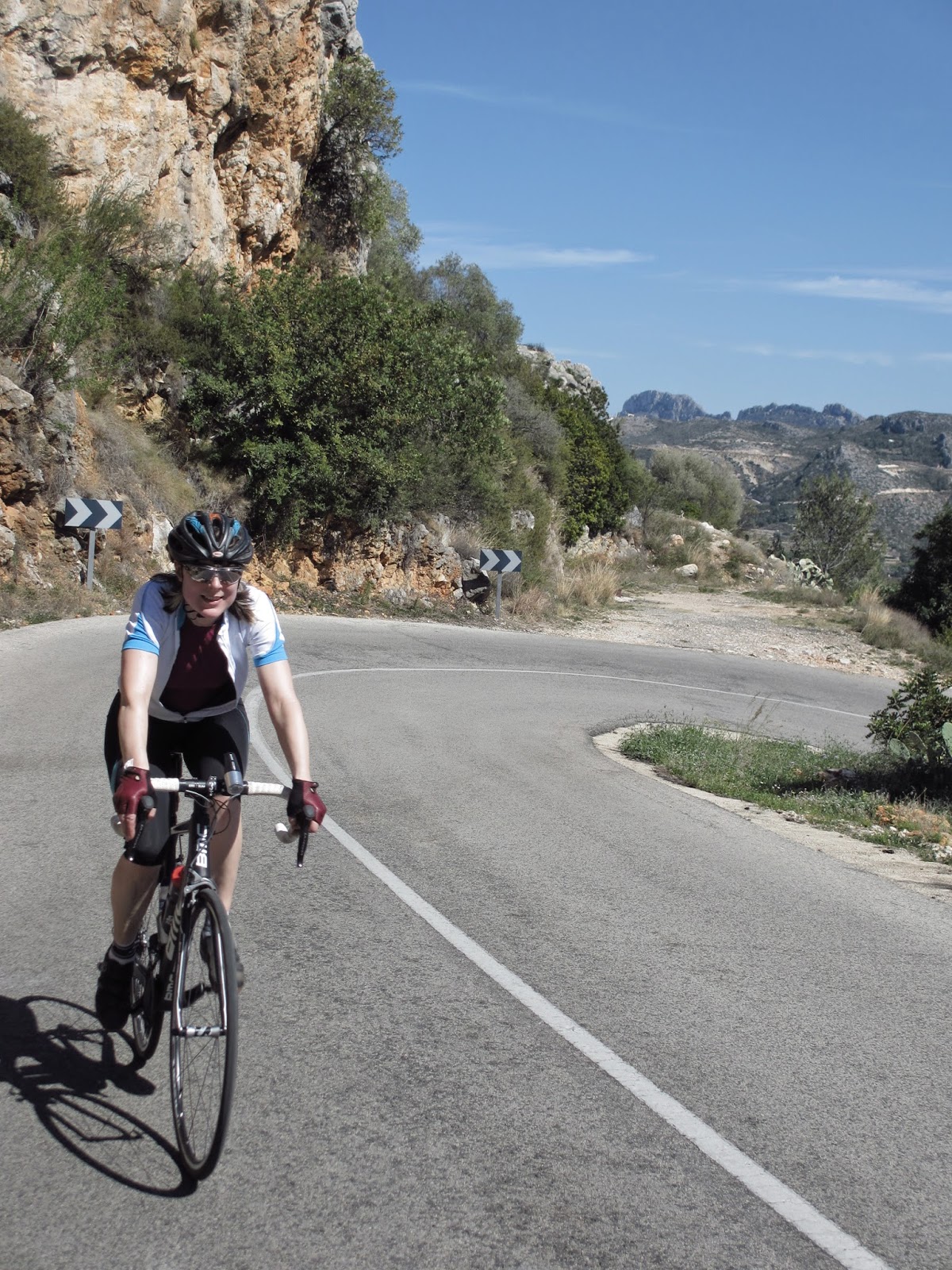 Still smiling… how that would change!

The roads changed to high and rolling rather than continuously up hill. I tried eating a bar. We carried on, passing towns, contained to little islands hovering over the orchards. We lurched into one, Vall de Alcala, low on water and hot, and combed its little streets for a cafe. It's the only time I can drink Coca Cola, as my legs start to empty and at the onset of dehydration. We chased it down with coffees. With sugar. And with hindsight we'd have used our last 5 euros for extra provisions. But we didn't.

I'd kept nibbling at the bars I was carrying but they were diminishing. We were back onto roads that we recognised from last year.  Familiarity might have cheered us up, but did not reduce the number of calories we needed for the climb up the pass from Benasau towards Confrides. We passed some stragglers who'd fallen off the back end of a train of cyclists that had passed us earlier. I exchanged a conspiratorial smile with one, but then got my head down and keep going. At least we knew how far it was and were bent on getting to the other side.

It was slowly occurring to me that 'Hungry eyes' on endlessly in my head was telling me something. Urgently. I finished the last bar and launched into the descent. It's fast and winding and flashed past. Chipps is much faster than I am downhill but on my new bike I could keep with him by half a bend (rather than losing sight of him).

There's a brief steep kick of a climb into the town of Confrides, and I stood up in my pedals to crest the hill. And realised that my pedalling was erratic. Somewhere in that last few miles, and unnoticed, all my last energy had been spent. I felt wobbly. And now that I noticed it, slightly sick.

'Come on' said Chipps, in a doubly, extra cheery voice. 'We're nearly at Benimantell'
'I'm hungry'
'Yes, I am too' he said, redoubling the cheerful, making-an-effort voice. We pressed on. At Beninmantell, I looked sideways. But the cashpoint is in Guardalest. 'Another couple of miles. Then I can get some extra money and we can buy lots of food.'
'I feel sick'
'Yes, that's because you're hungry.'

He was holding out for Guardalest because it's a proper tourist town. A pretty fortification on top of a craggy plinth almost inaccessible to enemies. In the daytime, sunlight glints on gilded domes.  There are cafes and cashpoints right on the main road. There's even a snack vending machine on the roadside. With the benefit of hindsight, I wonder how many broken cyclists collapse across their doorsteps. The proprietor was amazingly understanding as Chipps ordered hot chocolate and tortillas and I sat with my head in my hands. The idea of just closing my eyes was so soothing and comforting. I could blank out the pounding in my temples and the weird nausea and feeling of seasickness that was closing in.

'Don't go to sleep' said Chipps. 'Drink this.'
I still felt sick, my head was hot. Everything hurt.

I sipped the chocolate. Even in my dreadful state it tasted good. Thick as custard and warm. I tried to eat. But the tortilla tasted too strange and strong so I tried nibbling the bread that came with it. I've never struggled to eat, but chewing seemed almost impossible. I had no saliva and the bread was (to me) dry and hard. Chewing the tiniest bit seemed to take hours. I collapsed back, head in hands, taking comfort in the dark and hoping that something would take effect and I'd get the strength to eat more.

How could I have got into such a state so quickly? In truth, you don't ever really get into a state instantaneously. It's the product of too few calories for too long. Not packing enough bars. Perhaps the indigestible potato aoili had not helped. At any rate this was a proper, full on, road riding tank emptying bonk as I had never quite experienced it.

Yet the chocolate was working. I got through it and, as the bread was such an effort, ordered a second chocolate. Probably two or three hundred calories per cup. I hoped. The spoon almost stood up in it. Ruminating on the writing on the rim which seemed to indicate that it was fair trade and organic. Win win. After two chocolates each and when Chipps had wolfed his way through his tortilla with apparent ease, we thought we'd better get on our way. It was dark. He pocketed the remains of my tortilla and we set out.

I can't quite believe that we made it home. But once I got back on the bike everything seemed to work again. Fifteen miles flew by. I thanked the heavens that the bike seemed to know what it was doing, twisting round the bends of the descents at speed and taking every bump in the dark in its stride. We rolled down towards the sea, counting off the little climbs until we hit the coastal road that took us back to our door. 180km behind us and 3,000m of climbing. 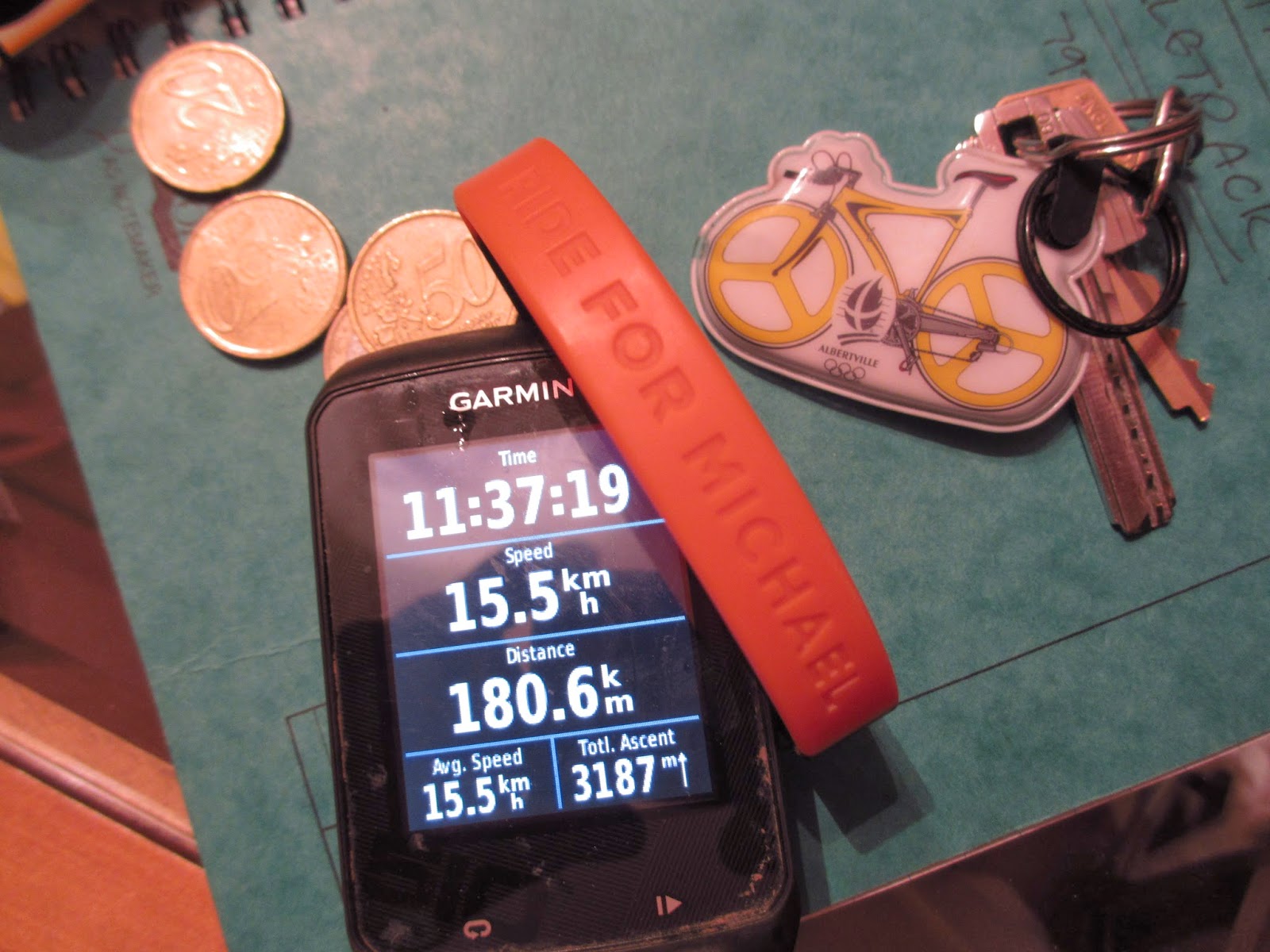 Back home and a couple of slices of easy pizza before sliding into a very welcome bed. I couldn't eat too much but by 5am whatever metabolic processes had worked themselves out and prodded me until I was wide awake and had to acknowledge that I was starving. The leftover tortilla was found and scoffed. Followed by a banana and some rice pudding I'd luckily thought to buy and leave in the fridge.

I am trying to avoid ever humming 'Hungry eyes' again.

As a post script, I have bought a stash of Spanish gels to ward off this kind of disaster. It was a very unpleasant lesson. But it's better learned today than in ten days time on the Tour of Flanders.