It's only March and we're already gripped with Tour de France fever. The Grand Depart, departing from Leeds and the two stages that wind through some of the best cycling in the world has more than just my cycling friends chatting in pubs. There's genuine excitement at the spectacle breaking through our traditional reserve - not to mention that (grudgingly) we've come to realise (with a string of medal-winning Olympians and two consecutive Tour winners) that Brits are not too shabby at sport on two wheels.

So it was not so surprising to see a steady stream of cyclists - loners and club groups - in the Dales at the weekend. We were visiting and riding out with our long-time mountain biking friend, John Pitchers, at the  Mountain Bike Livery  in Appletreewick. "You're lucky the conditions are good" he said, as we plunged, hub-deep, into a bog. After traversing the 'softer' ground, our stiff climb out of Kettlewell and hard work over the moor was rewarded with a flying descent down a little-used track to Starbottom, taking in rocks, grass and entertaining slither. 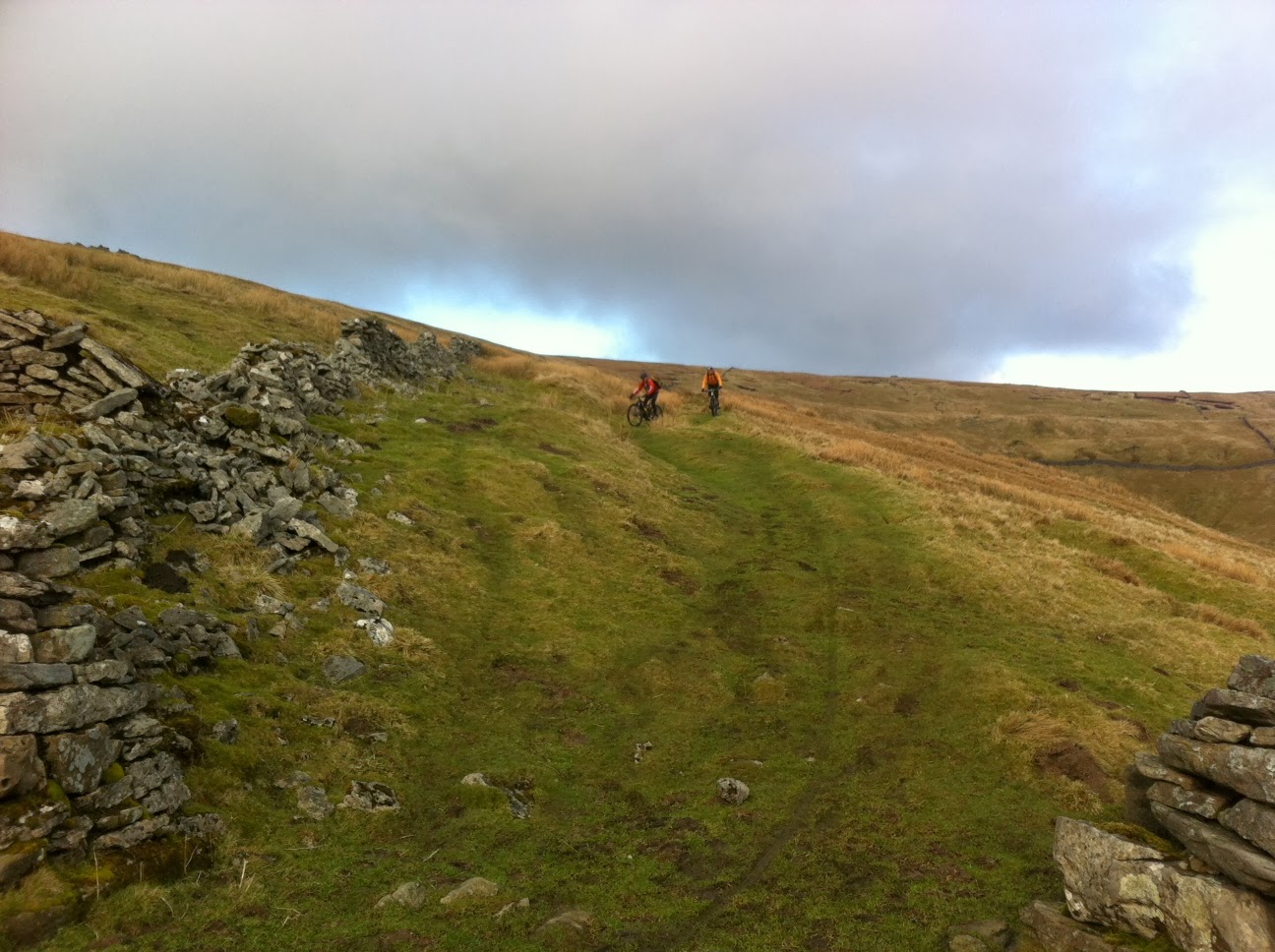 A typical Dales bike ride - a couple of hours to climb and descend 600m. Fantastic but not quite the training I need, so the following day I decided to ride the 60km home, taking in some of the Tour route. Sunshine and showers in Kettlewell

In just a few months the Tour will speed out west from Harrogate, through North Yorkshire, then wind its way the down through the narrow lanes of the Dales. It will pass through this green, farming, landscape, divided into neat fields with drystone walls, punctuated by stone barns for hay and grazed by sheep. Look up, and the moors above the fields are just bare and craggy enough to add a feeling of remoteness, and when the clouds cluster darkly about them, warn that this is not an entirely benign territory.

When I set off from Burnsall, it wasn't quite damp enough to count as truly raining but it was a long way from dry.  And this is the thing with cycling in Britain. It may not be at the extremes of anything, but it's definitely not gentle either. Our landscape is beautiful, but it is always ready to throw a curve ball; a midsummer hailstorm, a rolling blanket of fog or a gale force wind, just for fun.

I wondered about the Tour de France riders - I hope they'll get at least some sun for their stages in Yorkshire. It's beautiful in the sunshine but sapping when the weather turns.

My route took me through Addingham (a nice chap let me jump on his back wheel for a few miles of company - they're a cheery lot, my fellow riders) through Silsden to Keighley. I thought I'd follow the Tour route via Haworth but my cyclocross bike was seduced away by the cobbles of the main street into a quick detour. 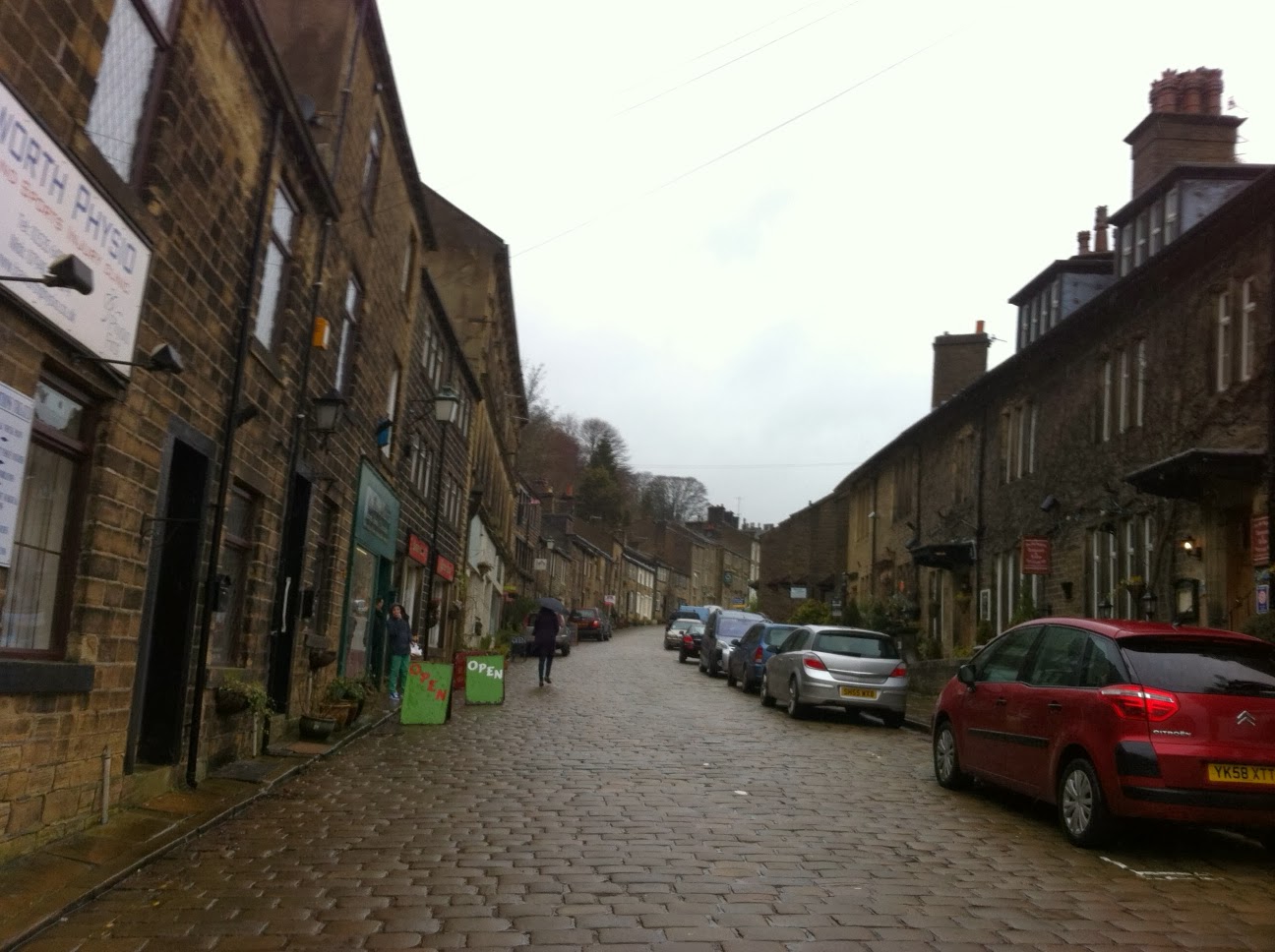 Then heading back onto the route on to Penistone Hill I hit 'real weather' as the wind and rain decided to drive the message home. 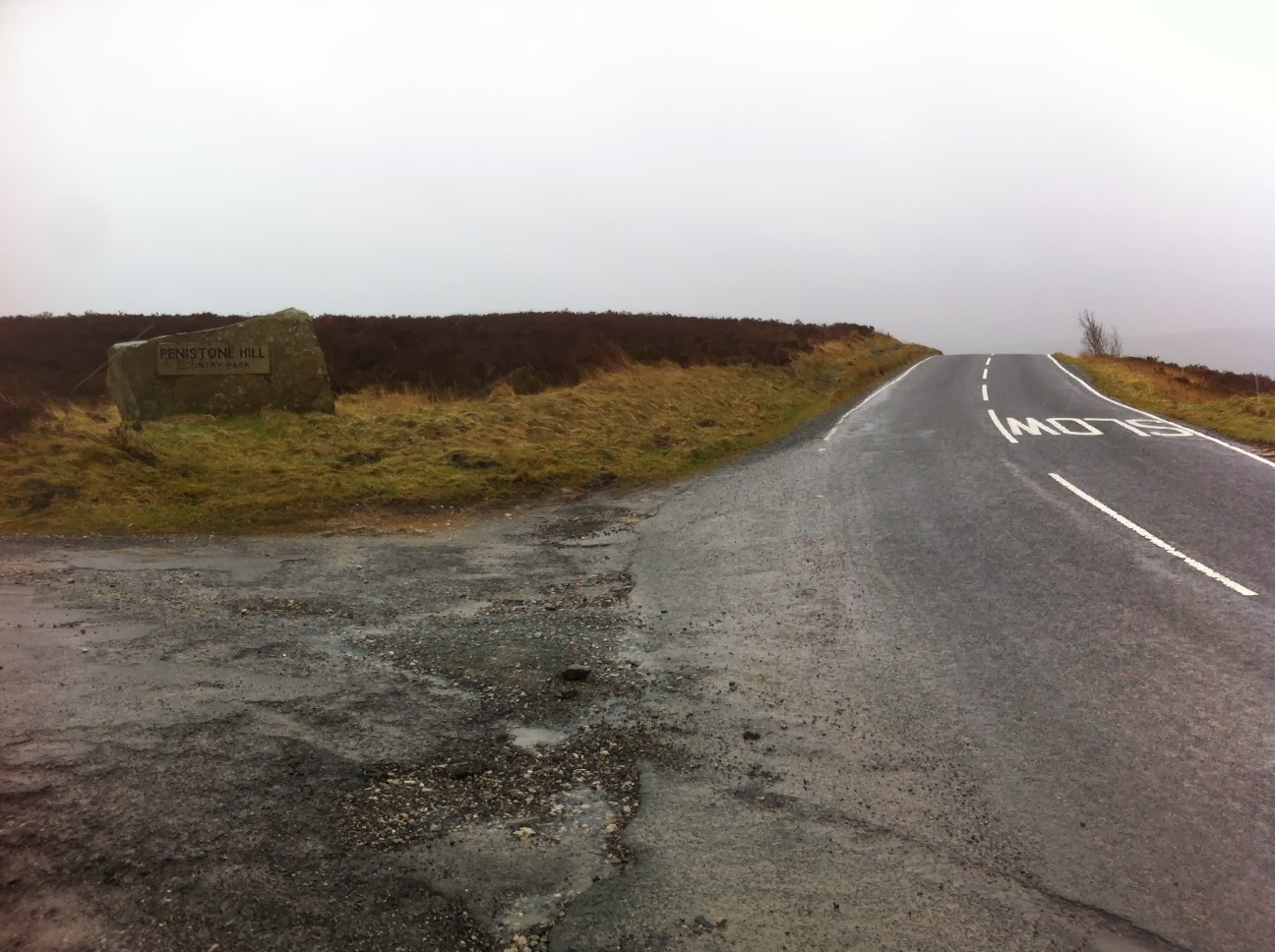 At this point, barely able to see and so soggy that I felt as though that was my substance to the core, I could think of nothing I wanted to do less than the long exposed climb out of Oxenhope over Cock Hill.

Miraculously I rediscovered the bottom gear, I've no idea where it had been hiding but it was a welcome moment! And at the top, seeing our own valley ahead spurred me on. This is a beautiful landscape, bleak and windswept, but lovely. 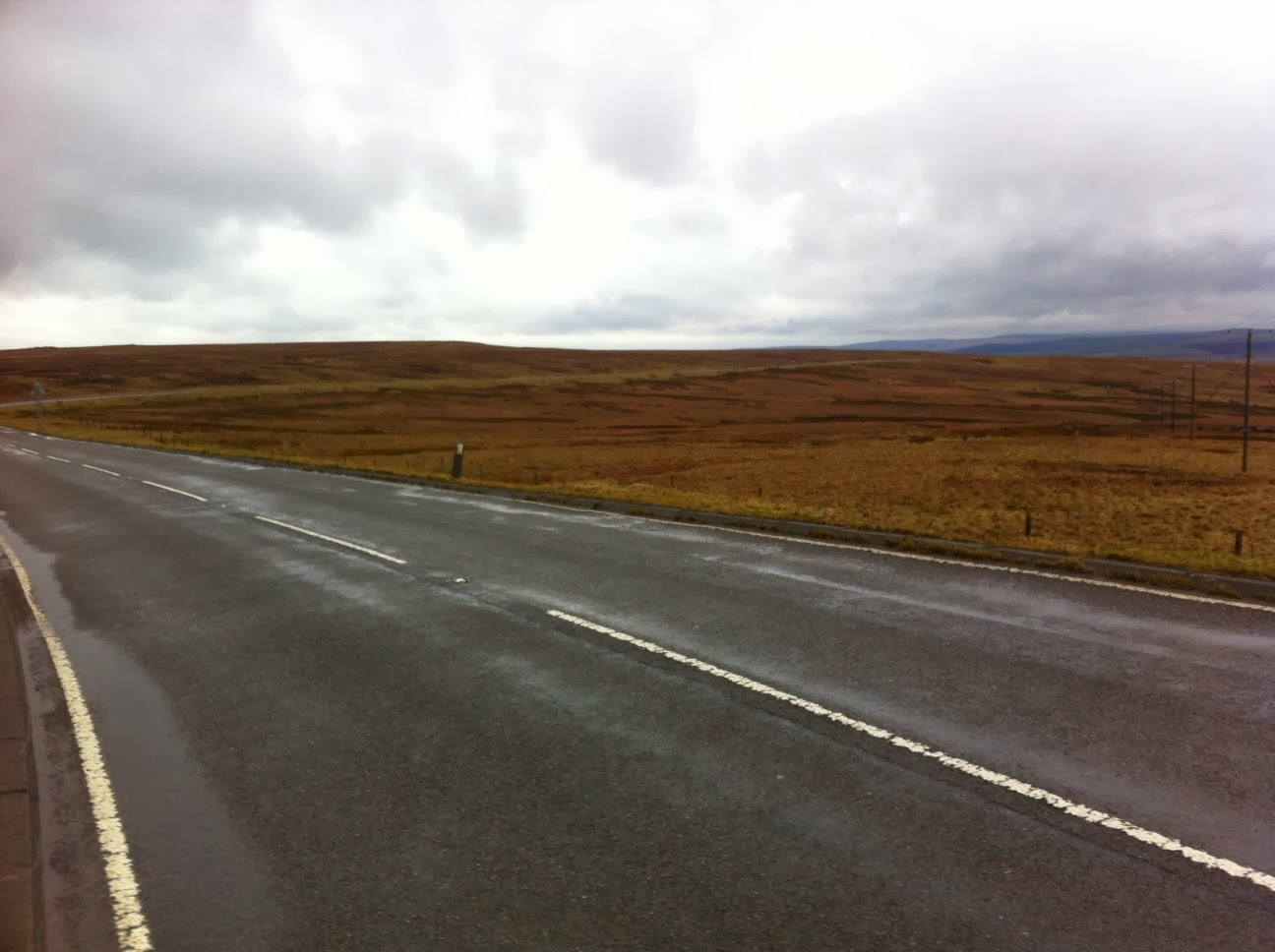 Pedalling downhill into a headwind just to get a bit of speed was annoying - on a still day, the descent from the top of Oxenhope Moor is one unending and exhilarating swoop, picking up more and more speed as it slips off the bare moorland, down into the valley into the shelter of green woodland and the town of Hebden Bridge.

Once in Hebden I turned off the Tour route (which carries on up Cragg Vale, our local hill climb and the longest continuous climb in the country) and towards home. On the way there was just one little errand to do. Visit the Makepiece sheep: 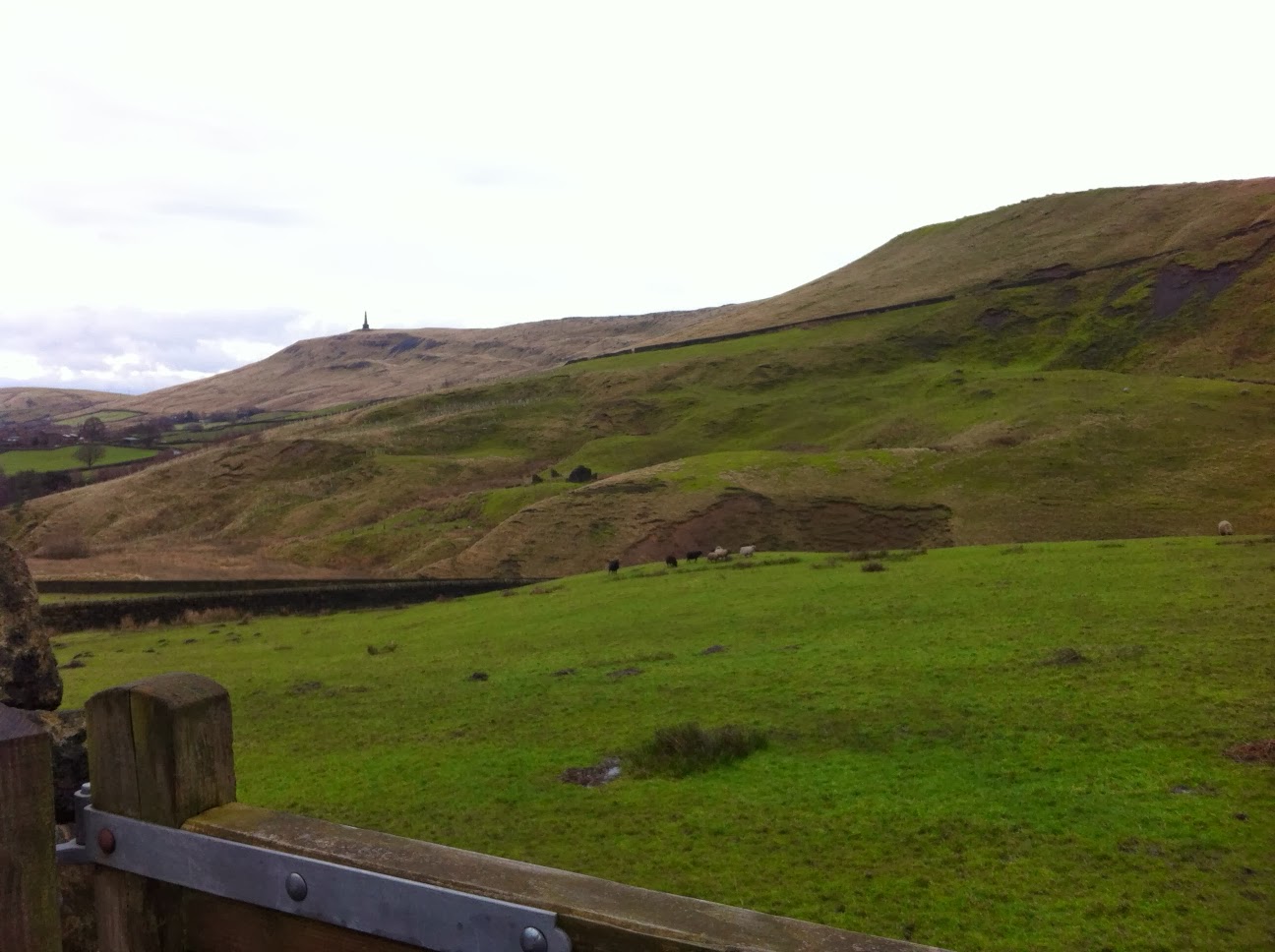 They were grazing quietly, so I tiptoed into the field with a feed bucket before pedalling the last few miles. 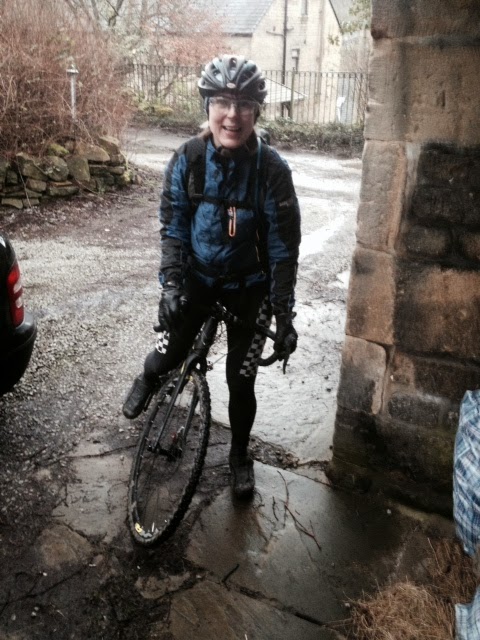 Despite the weather, I can't wait to get back out. We really do have some of the best cycling in the world - and it's brilliant that more people are going to see it.