My first century and other novelties

For a person who blithely applied to ride 244km of Belgian roads, bergs and cobbles, I've not actually been very far on a bike. I've never even quite tipped the 160km which makes up an imperial century, for instance. And I've never really had a structured approach to training. So there's a lot of new at the moment.

So far, I've followed The Plan. This in itself is a novel approach to cycling for me. But there's more, besides building up the distance (about which later), first I have embarked on a completely new experience:  intervals.

On Monday, Jason took me in hand to show me the ropes. So brief, so innocuous. Just three mad dashes up a long gravel slope, spinning my legs each time on the way down. Then circling the Philips Park trails for five minutes. And repeat. And again. Then I was allowed out to play on my mountain bike hard tail with the regular Monday Pub Night Ride, where I ambled along at the back with a cheerily deflating rear tyre. 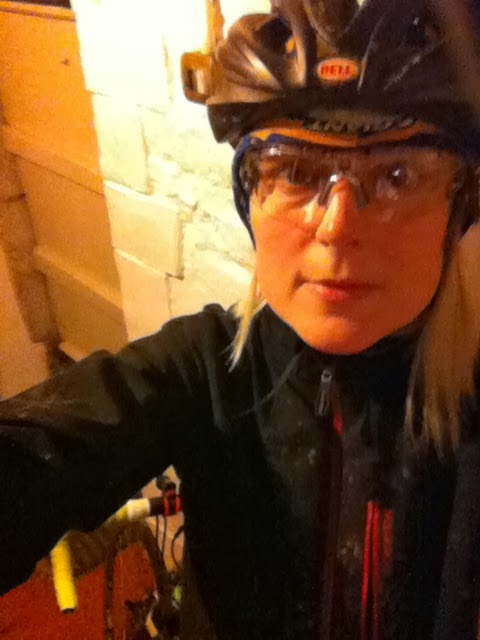 The following day I felt, ever so slightly, crushed to a pulp. The plan required that I repeat my efforts on Wednesday. Cheers Jason. I didn't make the mistake of going out for a social ride straight after, but the effect on Thursday was, if possible, even greater. My legs appeared to be made of lettuce.

This seemed to please Jason quite a lot. 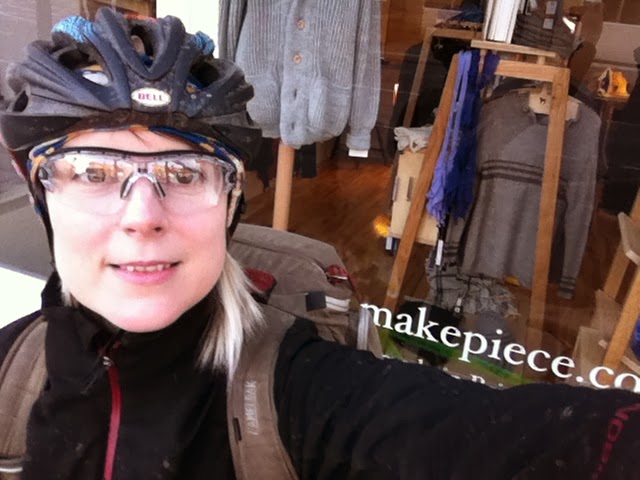 He instructed me to commute to work, not to do too much on Saturday then get 'a decent ride' on the Sunday. By which he meant at least half the length of the Ronde, or more; two thirds maybe, on a flattish route. 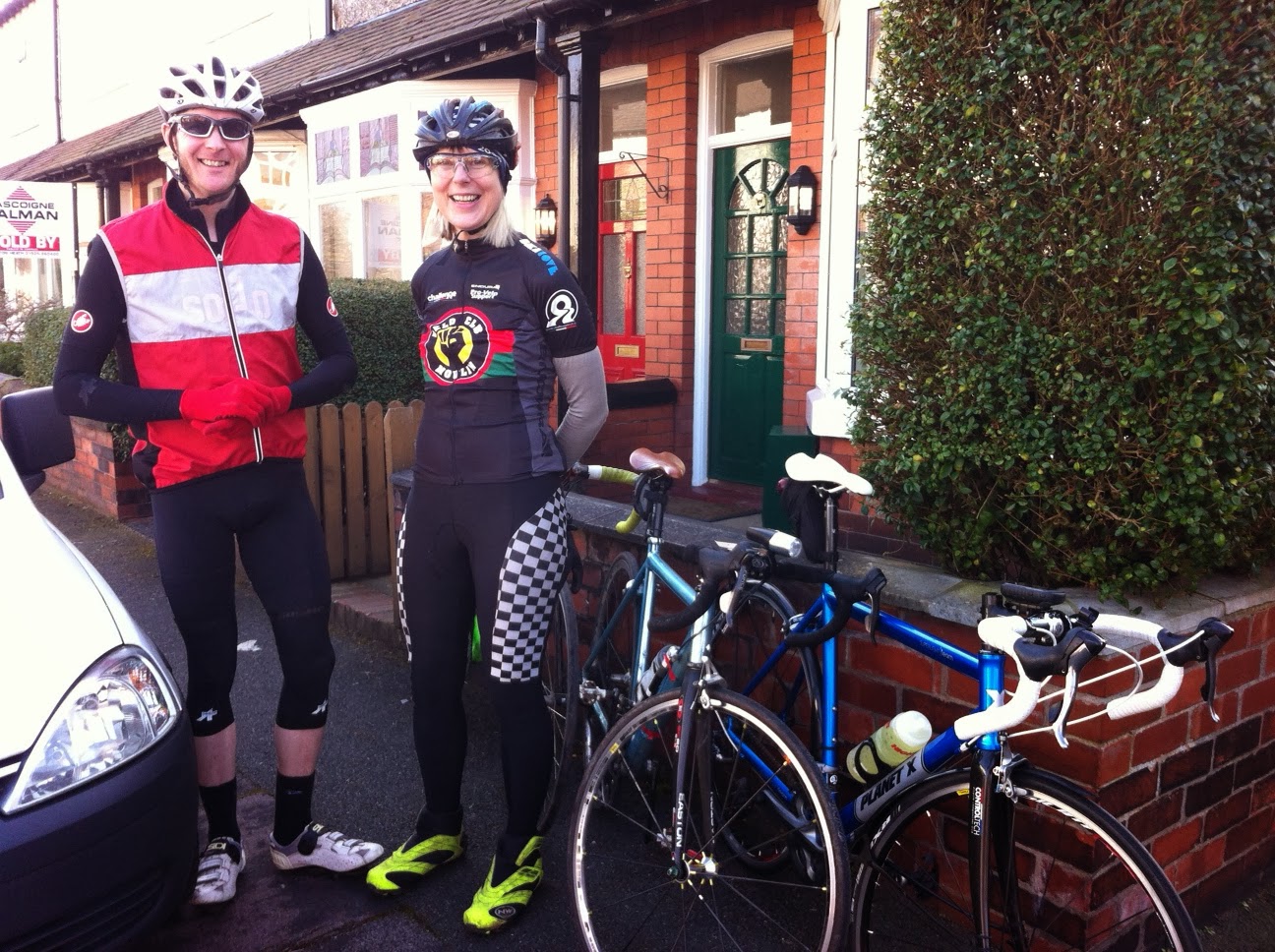 Setting out from Warrington with Si

Nothing, if not obedient, on Sunday I found myself heading out on my first ever hundred mile ride. My fellow travellers were my partner, Chipps, and our friend Si, who planned our route from his home in Warrington. It seemed odd driving out of the valley to find somewhere flat, but it was what was prescribed. It was even odder as we realised that the day had dawned bright and clear and promised to be not only warm, but also, sunny. 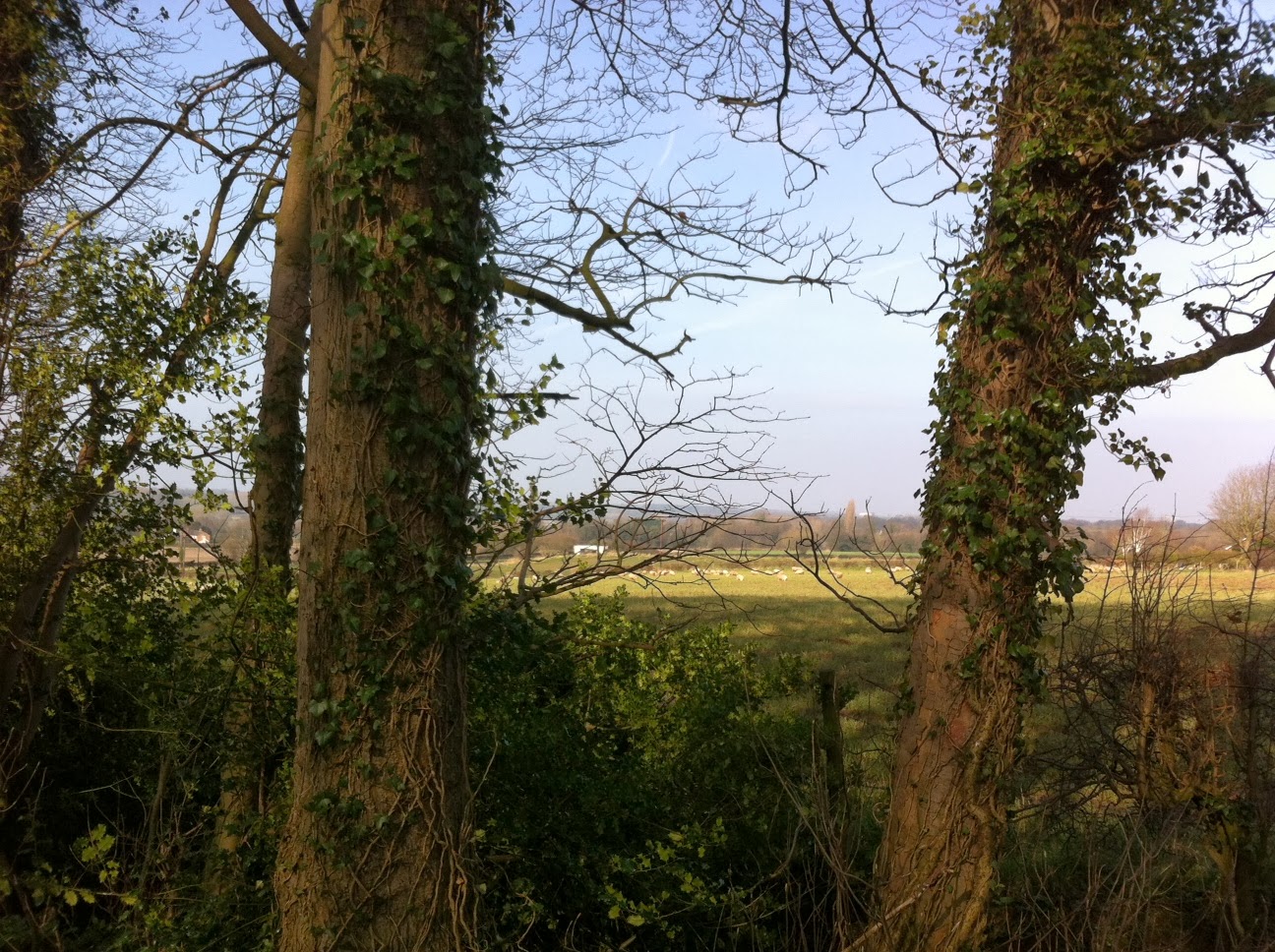 The ride was a treat - not quite flat but definitely more rolling than we're used to. Si had found a sequence of the quiet kind of lanes, mainly lined with hedges and trees, that are one of the defining characteristics of the English countryside. We rolled southwards through farmland, arable and dairy, in which Spring was definitely springing. Nantwich and Crewe were to the east, but we were oblivious to them as we skirted towns, and avoided traffic, chatting about rides, and road surfaces and bikes and events. 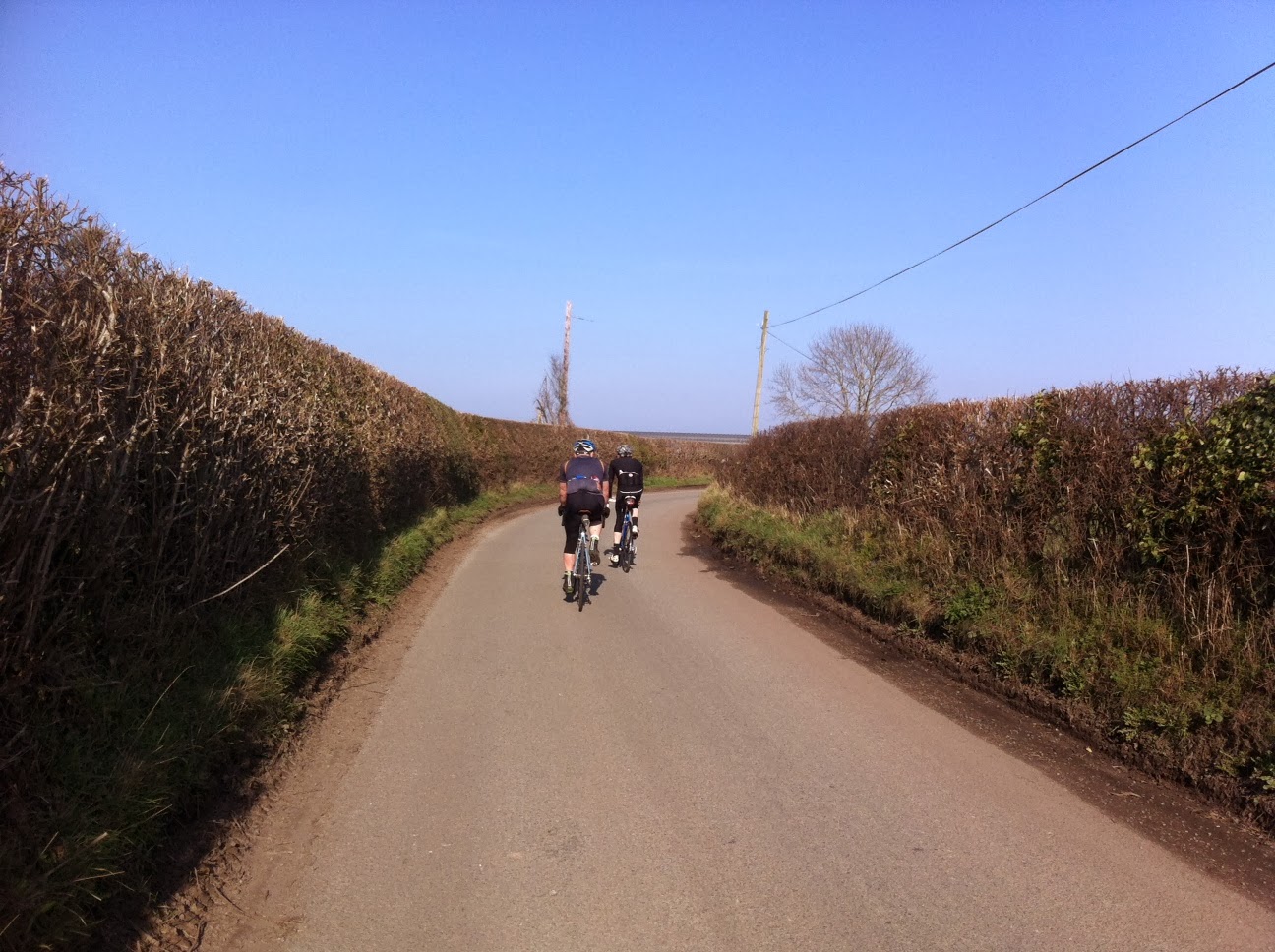 Chipps and Si on the lanes

Our destination was The Old Priest House Coffee Shop in Audlem, a cafe famous with cyclists. Our stomachs grumbling that bars and gels eaten on the hoof (or should that be wheel?) were not proper food, we stacked the bikes and sat down for the treat of the day; a quiet lunch of Staffordshire oatcakes - an oatmeal pancake served warm (unlike the Scottish variety) - rolled around eggs and bacon. With a pot of tea, quickly and sympathetically refilled, it was a perfect stop. 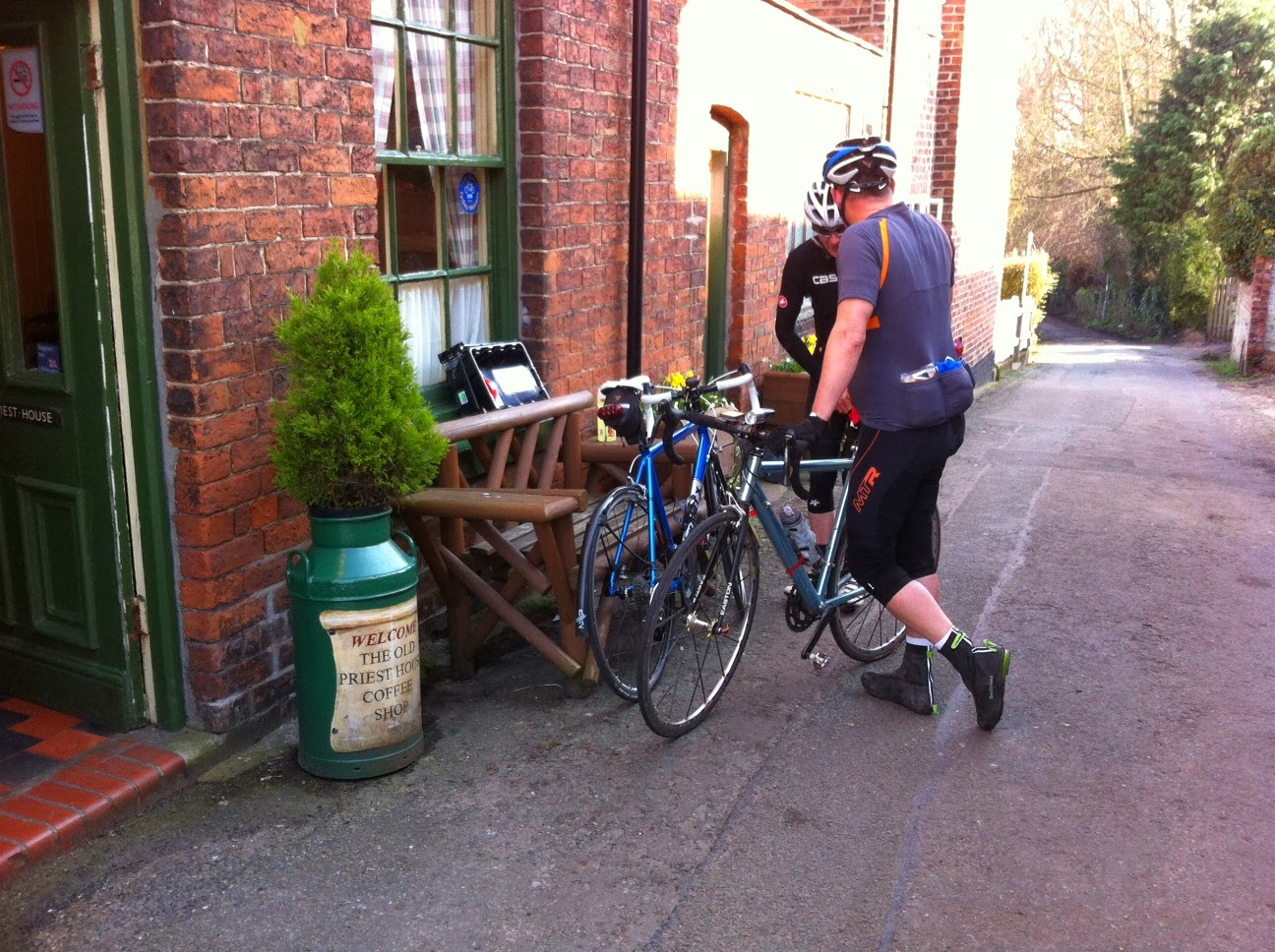 Rested and refuelled, we pressed on. After turning east for a few miles, we began to work our way northwards. I realised that our route crossed and recrossed the M6 motorway. Come this far and we'd usually be dodging juggernauts and weaving through traffic on our way to or from visiting friends or some far flung mountain bike event. But the little lanes had - almost deceptively - coaxed us fifty miles in the sunshine, left here, right there, freewheeling down hills and straining in the pedals to crest little ridges. We had left Cheshire, almost touched Wales and were beyond Stoke-on-Trent in Staffordshire whilst scarcely noticing the distance. 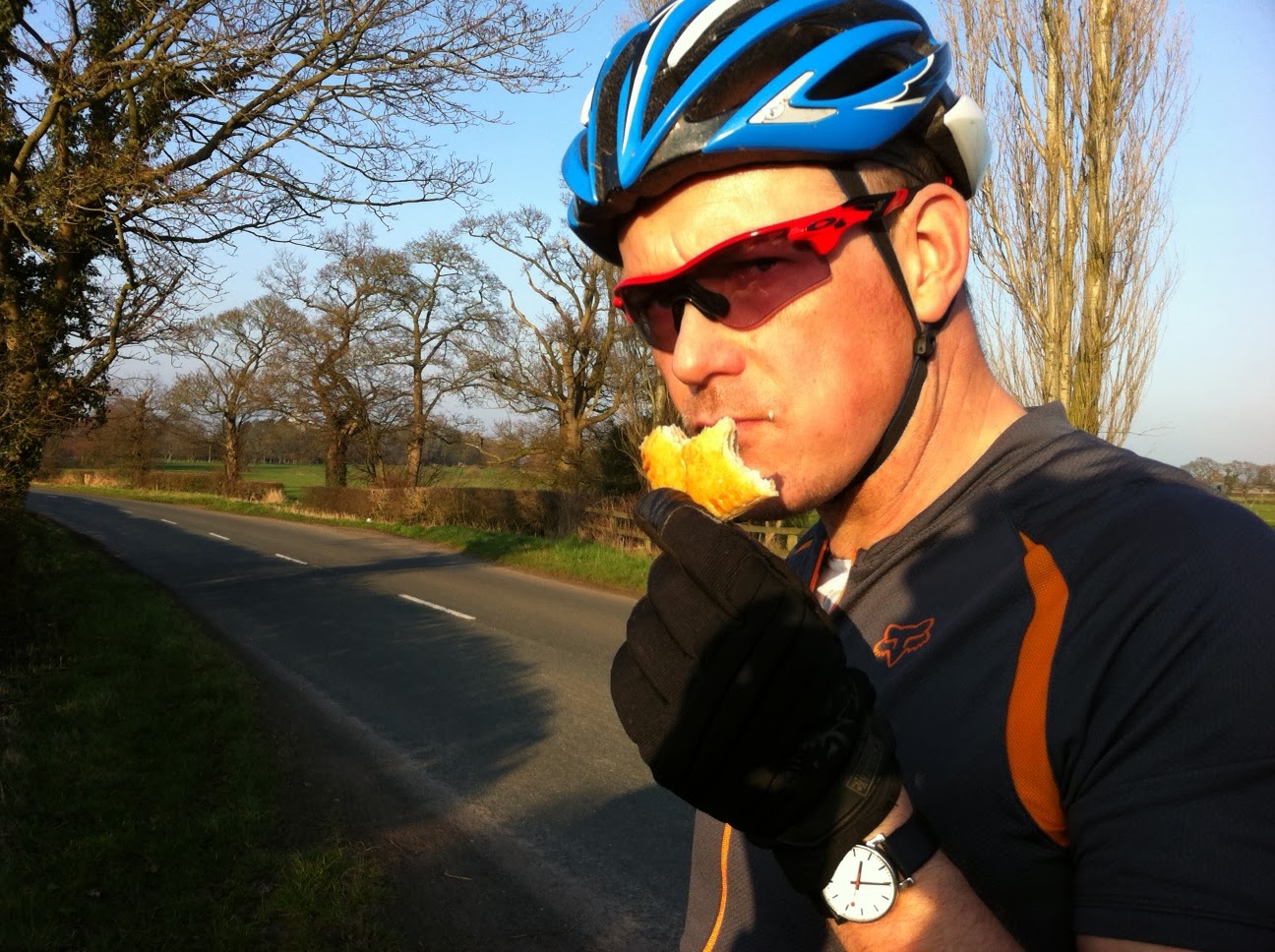 The afternoon set in as we passed the Jodrell Bank observatory. A quick stop for a snack whilst admiring the view. It's an amazing construction, bright white in the sunshine against the blue sky - and for a second a couple of russet pheasants posed in a bare field in the foreground, creating a postcard scene. 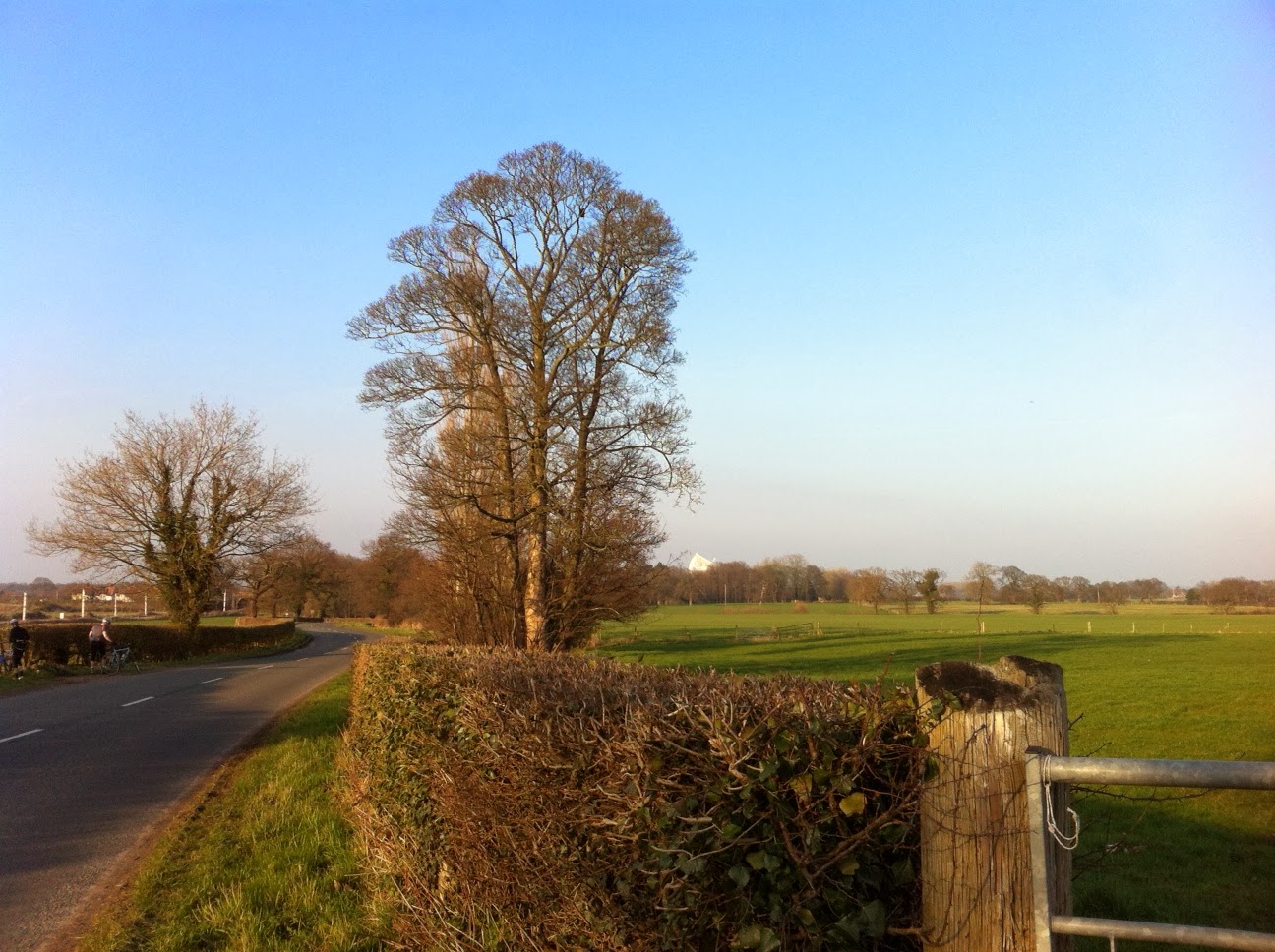 Dusk started to fall as we spun the last ten miles back into Warrington, with Chipps encouraging me to practice sitting on his wheel, a vital energy-saving skill on a long ride. Somehow a hundred miles had slipped by, a hundred sunny miles, easy and sweet. 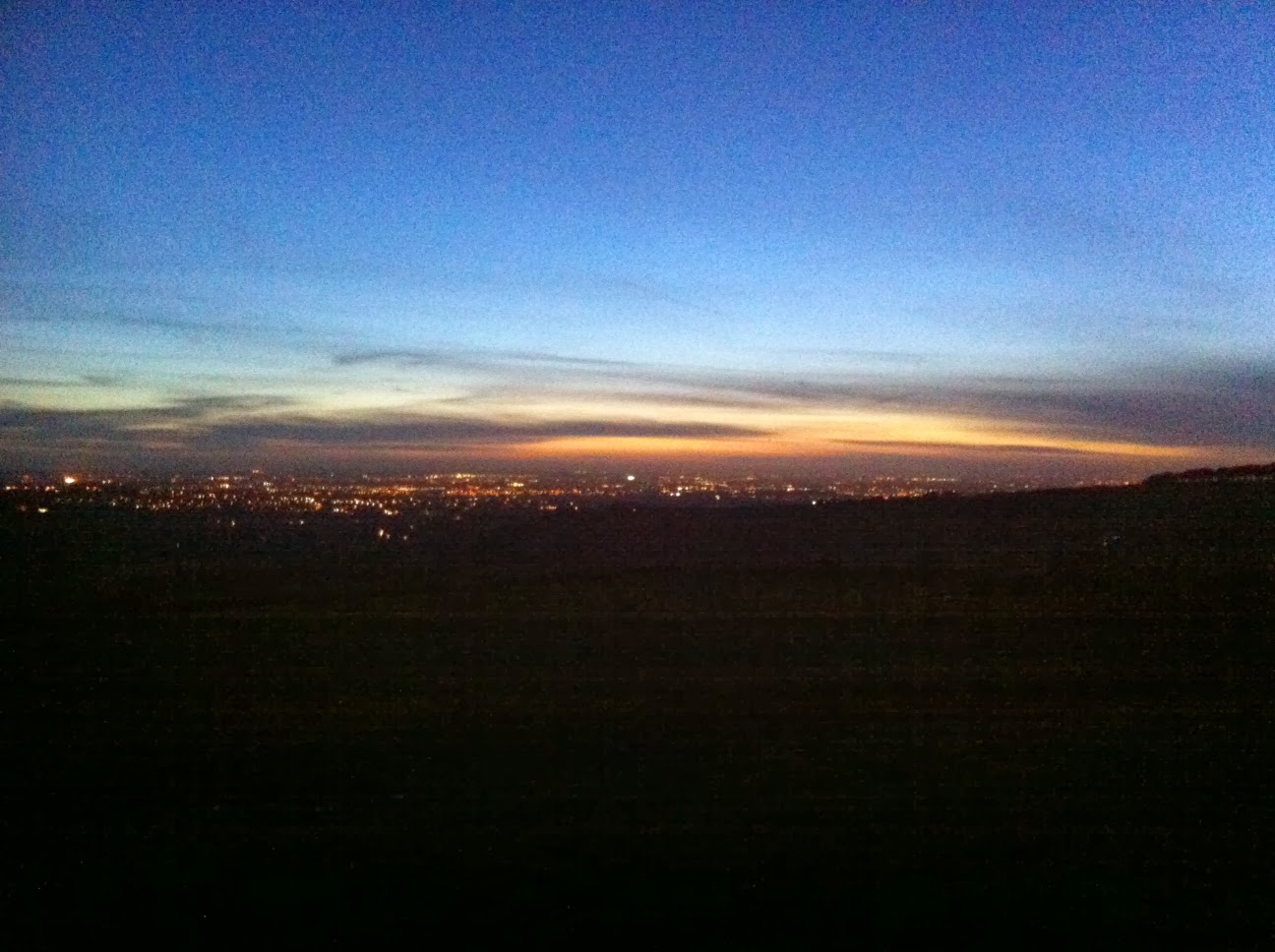